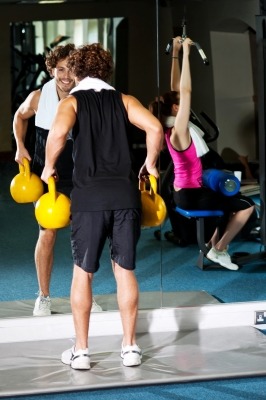 While December is the month of Christmas. January is considered the month of Christmas for gyms. The amount of memberships purchased in the New Year skyrocket. The gyms and group exercise classes are packed. Everyone is so gung-ho and excited for a chance to wipe the slate clean and start over.

Then comes February and March.  The gyms and classes aren’t as packed. Then the many excuses.

I don’t have time.

I’m not reaching my goals.

I understand that the gym is not for everyone and depending on your financial situation, it can be expensive and/ or a waste of money. But hear me out, it’s only a waste of money if you’re not using it regularly, using it properly or are bored out of your mind because you’re only running on the treadmill the whole time.

It seems like many bloggers are big fans of running. I loathe running. It’s like watching paint dry for me. I can respect the fact that is a somewhat frugal way to get into shape and great because you can do it anywhere. It’s a great cardio workout.

Many people seem to only focus on the cardio aspect of getting into shape.  They forget the importance of  weight resistance training. For all you females out there who think you will bulk up into the Incredible Hulk, think again. We don’t have enough testosterone. If you are doing many reps while lifting moderately heavy weights (muscular endurance training) versus lifting extremely heavy weights to maximum failure (meaning you should be struggling after the 5th rep), then you are looking at developing lean muscle instead.

Translation: You get more toned.

We lose a lot of bone density as we age, and this also affects our posture. Our metabolism also slows down as we age. Aside from the obvious in terms of getting you stronger, weight training also increases bone density and increases our metabolism. You can burn a lot more calories with muscle compared to fat.

While you can easily buy weights, the DVDs, and the equipment to use at home, one of the things I think lacks in home gyms is motivation. I hear many people say that they work out at home, but I have yet to hear many people say they got the results they wanted from home training.  The gym is full of motivation. It’s everywhere. Personal trainers. Group Exercise Instructors. Other Members.  They are all there to encourage you and push you just a little bit further than you think you can.

Here’s  my two cents on the same  old excuses for not going to the gym/exercising in general.

No sh*t, Sherlock. It wasn’t meant to be easy. Nothing worthwhile is ever that easy. In order to change yourself, you need to challenge yourself and push yourself. It’s going to hurt for several days. That’s a sign your body is changing. (If it’s hurts for longer than that, you may have injured yourself due to improper technique or going too hard, too soon, rather than gradually).

It’s such a great feeling when I’ve accomplished that tough workout. I feel better, happier and more energized.

I’M TOO BUSY/TIRED/I HAVE KIDS

We’re all busy and tired. It’s just a matter of working it into your schedule and making it part of your weekly routine. If you like classes, then have a schedule posted on your fridge where you can clearly see it. Pack your workout gear after you pack your lunch.

You don’t necessarily have to put in a full hour. Some gyms have a variety of classes (which is great for motivation in my opinion. And they don’t all require coordination such as spinning or weight lifting classes), that are less than an hour.  If you have small kids, many of them  offer childcare services.

I know sometimes it’s the last thing you want to do after a long day of work. You make finances and your family a priority; your health should be a priority as well. Make time for it. Don’t expect it to be a habit right away though. It takes between 18-224 days to make a new behaviour an ingrained habit, indicating a considerable variation based on the individual.[1]

I agree with this one. Obviously it’s also a waste of money if you’re not using it. Some gyms offer corporate memberships. Another option is to look into the fitness centres at your local community centres. Their rates tend to be lower than the big chain gyms and they tend to have more flexible memberships such as pay as you go.

I’M NOT REACHING MY GOALS

People want instant success. They want instant wealth. It’s not different in terms of your weight/body shape. They want changes to happen almost overnight. They complain that’s it’s not working, yet they are not willing to put in the time and effort it takes, as well as changing their eating habits. Being active and healthy is a lifestyle that can take time to adopt. Changing your overall shape and fitness is something that takes time as well. As I said before you need to CHALLENGE your body. If you’re not sweating buckets, not gasping for air, and are still able to carry on a conversation, you’re not working hard enough. I’ve seen people TALKING ON THEIR CELL PHONES while working out.

If you’re not reaching your fitness goals on your own, perhaps you’re not using the equipment effectively. Many gyms give a free orientation on how to use the equipment. You can take it further and look into personal training (or perhaps ask for that for next Christmas). Many times, personal trainers will give free workouts to promote their business. Another alternative is group training, which is a fraction of the cost.  Many gyms offer group exercise classes as part of the membership. They’re a great social atmosphere and a great way to meet people and perhaps your future workout buddy. (My sister and brother in law first met at the gym).  Some gyms also offer other amenities such as squash courts, swimming pools and evening rock climbing walls.

People are often intimidated to work out in the gym and join the classes because they feel they’re not fit enough or will get made fun of. It’s a learning curve. We’ve all been there.  Trust me, I’ve been there too. Now I’m a group fitness instructor and have been for almost five years.  It should less intimidating the more you come back.

You don’t have to be fit already before you go to the gym.

Final words: Don’t knock the gym membership. It can be worth it.  Get into the routine of being active, but switch up the type of activity from time to time.