Are you one of those people who gets annoyed when they see a cyclist on the road, even though they are clearly obeying the rules? Do you curse under your breath as you try to maneuver past them and then speed on by?

I admit I  used to be one of them.  Learning to ride a bike (no training wheels, baby!) was like a rite of passage in every person’s childhood. If you do not know how, for whatever reasons, I definitely recommend you learn. It became my mode of transportation in university to and from campus. I would ride it to get from one class to another because there were only 10 minutes between the two classes and of course they were on opposite ends of the campus. It wasn’t a very nice bike. Heck, it was a crappy Supercycle bike from Canadian Tire, but hey it was on sale and it got me from point A to point B.

Transition to the Car

Back to the Basics: Two Wheels

Even when my bf who is a bike mechanic master fixed it, it still didn’t make bike riding very fun. I had gotten into spin classes at the gym. Although it was several steps above just getting on the stationary bike by myself, I still found myself longing to have a decent bike to go outdoor bike riding with. I got a hybrid high-end bike from the bf for my birthday this year and have slowly gotten back into riding.

For me, its trail riding hands down. I have biked in a few cities,  with and without bike lanes. When there are no bike lanes and you are biking with moving cars on one side and parked cars on the other side, you can’t help but feel trapped. It’s even worse when parked car doors open or when parked cars start to become a moving car.  Dog walkers, joggers, strollers,  and other non-bikers rule the sidewalk. You are reprimanded most times if you attempt to bike on the sidewalk.  I almost always have a heart attack when I see cyclists biking late at night on the road with no helmet and no reflective clothing on.  I have even seen a cyclist texting and riding at the same time!

I love trail riding because the path almost seems endless. You don’t have to worry about the bike lane ending or almost being hit by a taxi. You can relax and enjoy the ride. You don’t have to be as aware or as defensive compared to when you are on the road. You can stop whenever and wherever you want. There is so much more freedom when you are on a trail. Sadly, there aren’t too many long scenic trails or designated bike paths where I live and you have to drive to conservation areas to get to trails.

Remember the days when people would say let’s go for a drive? I’ve only done that once- My bf and I had a HUGE fight and then made up and went for a drive. To my alma mater. But I don’t know anyone who says that anymore. Gas is expensive! I would think in my head, I could do so many errands on the way during my “drive”. Maybe I’m too practical.

Every time I see someone biking, I often think I should go for a ride. Whereas people go for a run to clear their head, I find going for a bike ride clears mine. There’s just something about the “whoosh” as you go downhill.

When was the last time you went for a ride? 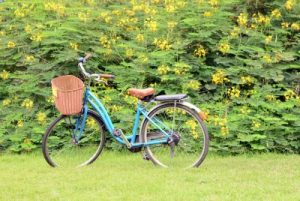 « My Personal Finance Story
The “Cycle”ology of Bike Transportation »