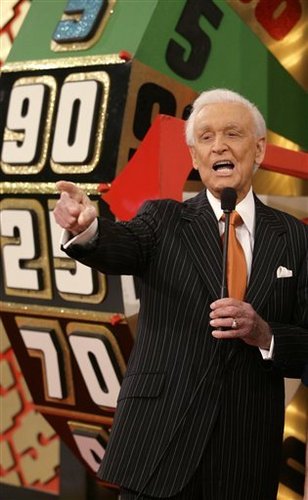 Bet you never thought of the Price is Right (the original with Bob Barker. Drew Carey is awesome, but you can’t beat Bob) in that sense. If you did, then you were a personal finance nerd/geek right from the start.  Perhaps you can link any game show to personal finance, as it is another way of obtaining additional money.  From the  classic ones such as Wheel of Fortune and Jeopardy to the game that puts you in the hot seat, “Who Wants to Be a Millionaire?”

However, you can’t beat The Price is Right- just the title alone screams personal finance. It IS the ultimate personal finance game (and if you beg to differ, please do so  in the comments). You have to know your prices. And you have to know them well. Or just be pretty darn lucky. It all starts when your name gets called by the announcer to “COME ON DOWWWWWN!!!!.”

If you’re not the closest bidder without going over, then you may be SOOL (sh*t out of luck). There are several rounds of bidding however, so you do get more opportunities to bid on random items. You can either move on or  remain in the pit. I would watch the show with  my dad and we would try to make bids as well.  A lot of the times I would be heavily influenced by the other potential contestants in the back screaming and holding up 1-5 fingers. I could never tell if they were trying to help you or steer you completely in the wrong direction.

I loved the mini games they would play that would test their luck and their knowledge of prices.  I have vague memories of contestants rolling gigantic dice on a table, playing mini-golf, using gigantic playing cards and Plinko, that fun game where you just watch the chip make its way down the peg board into who knows what slot. Regardless of whether or not contestants came out a winner, they always seemed like they really enjoyed playing and it was an experience.  Heck, I would be excited just be in the audience and be part of  the craziness.

Although there was only one grand prize winner in the end, it seemed like there was more than one winner because of all the mini games that were played and all the prizes that were won. Some of the prizes were a brand new car just from playing a mini game.

The Bonus Round aka The Showcase Round

How fun would it be to spin that gigantic wheel that determined whether or not you went into the “Showcase” round? Even just to spin it for the sake of spinning it? Or maybe I’m the only one. 🙂

The Showcase round was the best round because this was where the big prizes were to be won. It was like winning a small lottery. They would consist of  exotic vacations, cars, boats, televisions – almost anything your heart desired. If you were the first contestant, you had the choice of bidding of the first package or taking a risk and holding out for the second package, which could be either better or worse than the first one. Imagine you won a car from your first game and then you won something like a cruise AND a boat (obviously a smaller one than which you go on for your cruise) from the Showcase. Talk about reaping the rewards!

Only now do I see some personal finance significance within the show. EVERY game has to do with pricing, hence the name. I would have been horrible back then in regards to guessing prices on grocery items. Now that I do the grocery shopping, I keep track of how much things cost.  So maybe I would actually have a chance at that one. Any game where you have to guess the price of a car, I would be horrible at. I only know how much my car costs.

I like to think of the Showcase round  showing the risk vs. reward principle. The bigger the risk, the bigger the reward. However, you are taking a risk, so there’s no absolute guarantee the reward will be better.

Can you think of any other game shows that are personal finance related? What was your favourite Price is Right pricing game ? Check out this link for a complete listing of the pricing games.

« Are Self-Scan Kiosks Harmful of Useful for Retailers?
Paper or Plastic? Or a jar full of change…. »