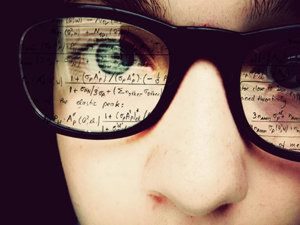 What is the difference? As a self-proclaimed nerd and proud to be so, I have asked myself this question time and time again. My common law partner, who is a fellow nerd (even more nerdy than I am at the current moment) theorized that nerds are more fact-finding intellectuals and geeks tend to be big fans of a certain thing. Think Trekkies and Star Wars.

My nerd traits:I’m socially awkward. I love reading. I love going to the library. I love learning and taking general interest courses. I love random facts and often quote them. I like crossword puzzles and Sudoku, but not as much as my colleagues at work.

His nerd traits: Very knowledgeable in computers. Is my personal IT guy. Can fix and build computers. Likes to know how things work. Watched some Star Trek, but is more of a Star Wars fan.

Once a Nerd, Always a Nerd

I was considered “smart” and quickly earned nicknames like “brainer” and “brainiac” in school. I often got the comment, “You’re such a brainer.” Which at the time, didn’t seem very cool in grade school. In the third grade I got invited to take an aptitude test for entry into a gifted program that was being run by the school. All I remember from it was listening to Barenaked Ladies on the radio and doing a lot of matrix logic puzzles (Does anyone remember those? I really enjoyed doing them). I’m sure we must have had interesting conversations and debates too, but only the matrix logic puzzles seem to stand out in my mind.

I didn’t consider myself a super nerd. I definitely wasn’t a super athlete. However, I managed to make friends from both hemispheres. I took more of the so-called nerdy classes such as Physics, Calculus and Chemistry. In my first year  of high school, I got invited to join the math club. I went to one session and that’s about it. I joined random clubs and sport teams, trying to be an all-around student. I rolled my eyes at the cheerleaders (but after watching my sister as a cheerleader, I have the utmost respect for them. It’s a dangerous sport!) and football players.

Nerdiness is Cool in University 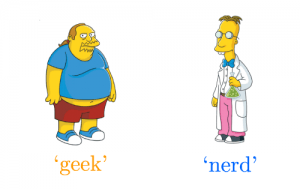 (I was more of the ‘nerd’. In fact I kind of looked like him, since I studied science in university).

How is it that when it comes to higher learning, nerdiness and geekiness all of sudden loses the stigma and becomes very cool? Is it because the nerd and geek population increases in university?I went to what many may consider the nerdiest school in the country. It had a reputation for bringing in nerds and having a lot of nerdy programs. Translation: it was an excellent school, perhaps almost equivalent to the American Ivy League schools,  hard to get into a lot of their programs, and employers actively sought out their graduates.

I  Think I’m A Little Bit  Geeky Too

I’m not a fan of Star Wars and I only like the new Star Trek episodes. I guess that doesn’t make me a true Trekkie, but I can do that   Vulcan “V” sign with my left hand and only my left hand. It’s probably because I am left-handed. I read all of the Harry Potter books and  watched all the movies.  Ditto with the Lord of the Rings.

The following article entitled “On Geek Versus Nerd” goes into great detail about the differences. It also includes this amazing scatterplot of words relating to geeks and nerds. I definitely lean over more to nerdy side. (One of my dreams was to be on Jeopardy- I loved playing along with the contestants on television and would get mad at them if they got the wrong answer).

So are you more of a nerd or a geek?

Do you consider yourself a nerd in one area but a geek in another?

Are we bloggers geeky and is the technical aspect of blogging nerdy?

« Expensive Art: Is it Worth The Money?
I Refuse To Be a Slave to Technology »