With only our daypacks and duffel bags, we took a bus ride to the town of Ollantaytambo. This town is an Inca site, about 60 km northwest of Cusco. We visited a local community and saw the local women weave beautiful designs by hand. The tour guide mentioned all these designs are all in their head and they don’t work with any patterns as a guide. I can sew a button and sort of fix rips. That’s about it.  What’s great is that the government has helped them realize they can turn their weaving skills into a business and support their families. They were kind enough to let us try the clothing they made by hand. We also worked in their garden for a bit using simple tools such as rakes, hoes, and picks to break up the soil. It was freakin’ HOT. I don’t know how they were able to do it, day in and day out wearing sweaters, but they said they are used to it.

Lunch was mostly vegetarian consisting of some traditional Peruvian cuisine such as potatoes, quinoa and rice. With the exception of fried guinea pig. Mmmmmm. Yes. Guinea pig. Those rodents you have as childhood pets. The ones you had in your classroom, along with the hamsters running in their wheels. They are so darn cute when they are alive, but they look absolutely gross when they are cooked and ready to serve. I was very hesitant to try it, because well, would you want to eat a relative of your pet? I have never had a guinea pig as a pet before, only a rabbit,  but a guinea pig is still considered a pet here in North America. As I had mentioned before in my post Its the Journey AND the Destination That Make Travelling Worthwhile, I enjoyed experiencing the food and the culture. So I tried a small sample of guinea pig and well, I couldn’t say it tasted like chicken. In fact, I didn’t get really get a feel of what the meat tasted like because it was so salty and full of garlic flavour. The texture seemed somewhat fatty. Kind of like duck, but I had only ever had duck once in my life, so I’m not sure that’s an accurate description. While others opted for second helpings of the fried rodent, I decided one piece was more than enough for me.

We had another brief chance to buy some more things from the market and use the washroom. I forgot to mention that just like in Europe, you have to pay to use the bathroom in Peru. The Peruvian currency is nuevo soles and it costs you one sol to use the bathroom (toilet paper is provided, at least the ones I went to it was provided). The running joke was that we asked each other for their “soul” to use the bathroom.

The hostel in Ollantaytambo was not as nice as the one in Cusco. The shower option was either very hot or very cold. Nothing in between. It was quite cold in the rooms. We had asked for extra blankets. My friend’s blanket smelled like cologne. Someone had two dead spiders on theirs. But we managed to survive the night and brace ourselves for what would be an unforgettable adventure.

What was the weirdest thing you ate while travelling? Or in general? Would you eat it again?

One of many stunning scenic spots worth taking a picture of 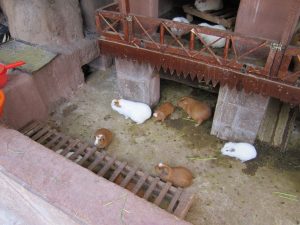 Pet or food? You decide.

Watching the local Andean women at work. Behind them is a display of their beautiful work. 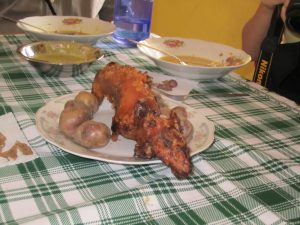