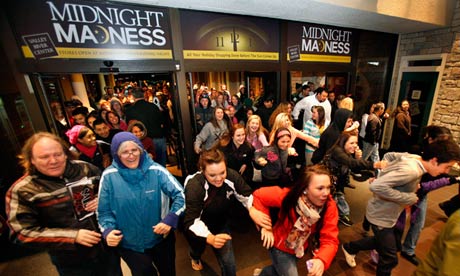 This coming Friday marks the day after U.S. Thanksgiving. This day is also known as Black Friday.  It is a day of scoring deals on everything ranging from electronics to clothing to furniture.  Depending on how you look at it, it can be a deal finder’s dream or just absolute pandemonium.

I’ll be honest. I’m not a shopper.  I almost get annoyed when guys automatically stereotype me as a shopper just because I am female.  The last time I ever went across the border just to shop was with my parents when I was a teenager. That was quite awhile ago. I remember not really finding anything, but felt pressured to buy something just because we had driven all the way to the outlet malls. When I was a kid, I was always excited for back to school shopping  because going to the U.S. meant I would get clothing that most likely nobody else would have. However, when more and more of the stores started making their way north of the border, such as Old Navy and Target, going cross border shopping seemed to have lost its appeal. At least for me it did.

I know that in Canada, we pay a lot more for certain things, but I don’t have any desire to spend a weekend waiting in lines at the border, and then again waiting in line at the store for a bargain. I don’t want to spend my whole weekend waiting. Time and time again, I’ve heard people say it’s worth it, you get a ton of stuff, etc.

BUT I DON’T WANT MORE STUFF.

Why would I go to another country just to buy groceries? I can still get groceries for a decent price right here in my  hometown.

Shop Til You Drop. Literally.

Yesterday in the news, I saw people setting up tents in a designated  line in front of Best Buy. It’s not even Black Friday yet and they’re already pitching tents. Tents outside in the middle of winter. I sure hope they have their mummy sleeping bags and thermal underwear.  I certainly would not brave sleeping in the cold just to get a new plasma screen TV.

The media does a lot of coverage on Black Friday and there is almost always someone who gets trampled on in the midst of it all. It almost seems like something straight out of an arena where customers are gladiators fighting to the death just to get that perfect gift.  People get hurt. People even die in the process. And for what? To get 50% off a pair of running shoes.

I could understand if there a natural disaster and people were pushing and shoving to get food, water, medical supplies and blankets because those are necessities.  Those items are needed for survival. Things like tablets, laptops and iPhones are not. While they are necessary for certain occupations and they have became part of our everyday lives, is it really necessary to go apesh*t  to score a deal on it? Only a small percentage of people get deals and as Ben from the Wealthy Gospel put it, the rest of it is junk. Junk that we don’t need and could probably do without.

I’m all for getting deals. What frugal person wouldn’t?

It’s the Most  Crazy Time of the Year

You see people on the news brag about the deals they got. All the “stuff” they accumulated.  They seem to get a high off of Black Friday.  Perhaps they were able to get all of their Christmas shopping done on that day. Me? I prefer to break it up in spurts and go during the week or early on the weekend. As I said before, I’m not much of a shopper, let alone an aggressive shopper.   I guess I lucked out this year because I’m doing Secret Santa on both sides of the family, saving me a ton of time and money.

Black Friday may mark the start of the holiday shopping season, but at the same time I see it as a dark time of the year. A time when consumer greed seems to take over and the extremes that people will go to just to get a deal.   Obviously, not all Black Friday shoppers are like that.  It’s the crazy ones that ruin it for the rest of us. The store ends up looking like a war zone after all is said and done.

So what will I be doing this Black Friday?