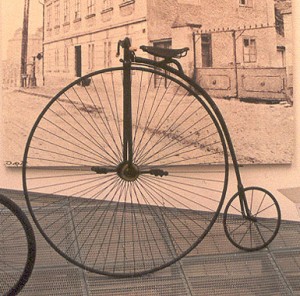 The Challenges of Bike Transportation

Two of the biggest challenges that cyclists and motorists share are communication and learning to share the road. Making eye contact, signaling where you want to go, obeying the laws of the road and not pulling any crazy moves are just a few things cyclists and motorists can do. Imagine a cyclist trying to do a U-turn on a busy street.

While good communication is vital, the greatest challenge for both drivers and cyclists is treating the bicycle as a commuter vehicle, not a recreational toy (Lagowski, K. “This is How We Roll”, CAA Magazine, Fall 2012).

Recall, it was the bike that was first invented before the car with all its bells and whistles rolled out. The first considered “bicycle” was  called the penny farthing.  Bet you didn’t know that! Imagine trying to maneuver that through the busy downtown core, although being at a better height than everyone else, you would be able to see what the traffic was like up ahead.
We know the obvious benefits of cycling: great exercise, frugal mode of transportation and better for the environment. This excerpt is taken from Cycling Health and Safety : A Review by Chris Cavacuiti BA, MD, CCFP, MHSc, ASAM:

” Anyone who cares about social justice issue should care about cycling:
Unlike cars, bikes are available to people of all ages and incomes. Most utilitarian cycling in cities like Toronto happens in the inner city , in fact, over half of all households in central Toronto do not own a car and must rely on bikes and other forms of transportation . Support for the concept of “complete streets” (roads with bike lanes, sidewalks and room for mass transit) is gaining support from a diverse range of people, including advocates for senior citizens and the disabled .

Anyone who cares about the environment should care about cycling:
While almost 50% of car trips are <5 km, bicycling accounted for an average of 1.2% of work trips in Canada in 2001 Using bikes more and cars less for short trips such as these is an incredibly effective way to reduce greenhouse gas emissions.

Anyone who cares about their health (or their children’s health) should care about cycling:
Health issues related to an inactive lifestyle (such as obesity in childhood and heart disease in adults) are much less common in countries where more people ride their bikes . The health benefits of cycling are calculated to outweigh the risks by 20:1 .

Anyone who cares about the economy should care about cycling:
Physically active citizens are good for the economy as they have higher productivity, fewer sick days and need less medical treatment. In fact, a Danish cost-benefit analysis suggests that for every dollar invested in cycling infrastructure we can save over ten dollars in reduced health care costs and other savings.”

As you can see from the review, cycling plays a huge part in society and thus it is imperative that cities strive to create a better cycling infrastructure  and put more cycling laws into effect And cities are  doing just that. Behold the Bixi bike:

It is a shared commuter bike that is used by the general public. It is currently found in major cities such as Toronto, Montreal, Boston, London and Melbourne.  People can go to a station, located at various checkpoints throughout the city, insert their user key and release the bike from its docking point. The bike can then be returned at any docking station within the network.  Even the docking station itself is environmentally friendly, in that no excavation for a site needs to be done and the system is powered by solar panels. Check out the website for details on this clever concept for urban transportation:  http://www.bixisystem.com/what-we-do/public-bike-system/

I have never used the system myself, since I own a bike , but its a great way for people to get around if they don’t have a bike. It’s great for tourists too if they want to explore the city, but don’t want to fork over tons of cash for a guided bike tour.

Take a look at the table below from the article How Dependent on Cars are We?:

« Three Cheers for Two Wheels!
Making Sense of My Sense of Adventure »