Maybe some of you are wondering what happened with engagement ring shopping and why I haven’t plastered a pic  of my finger all over social media. Or maybe not.

So we looked at several stores and also a company that supplies to jewelry stores. While we would be able to get a ring at cost, meaning it would cost half as much compared to what the store was selling it for, I only had one thought it my mind.

I couldn’t get over it.  Damn, gemstones are expensive. It was within what my fiance/partner/bf/housemate was willing to spend, but my thoughts were:

When the sales rep showed me a ring for what was literally $100, it looked pretty plain and crappy. It looked like something you got out of those 5 cent machines where you turn the knob and out comes your toy in a plastic bubble.

After talking to a couple of married people, they told me they don’t even wear their engagement rings or wedding rings that much.  I’m not really a ring person. I lose things left, right and centre. Although I have been pretty good at keeping what low value jewelry I currently have.

Guys can rent tuxedos. So why can’t you rent rings? Just to have for the ceremony? Or is it considered a “sacred” ( I initially typed in scared. Haha) thing?

They also mentioned that they felt all the planning and stress wasn’t worth it. Mind you, they had more traditional style weddings. When I think about just planning a wedding in general, it makes me think of all the times I didn’t want to do homework.

We did check out one venue though. I thought it was worth checking out because it was smaller and different. Unfortunately, it ended up being a heck of a LOT smaller than I thought, along with a very steep set of stairs and only two washrooms.  It was a coffee shop, so you could understand the size and the amount of washrooms. I had seen wedding photos of people who had gotten married there and thought, how cool is that. 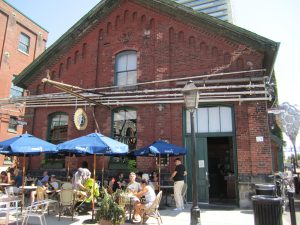 A year ago, I had written a post about how I wanted to get married for all the wrong reasons.  Fast forward to now and I think I do want to get married for some right reasons such as to make our parents happy and to have a fun time with our close family and friends.

It’s just the planning that I hate. According to my sister, I was pretty good at planning her shower and bachelorette, so it’s not like I’m incompetent.  I think after years and years of growing up and planning parties (I even had a debutante ball type party, which was pretty much a wedding), I don’t want to plan anymore.

I’m quite lazy when it comes to planning social events. I am not your hostess with the mostest.

Much to my surprise, last month was way busier than expected. I didn’t have a free weekend till the end of the month. There was always something both on Saturday AND Sunday. I also got really sick  (READ: FLU AND STREP THROAT) during the last two weeks of September which was most likely due to not having any rest/down time. I’m seriously putting my foot down on saying no to more events-family or friends. My health is at stake here. It’s okay to say no here and there.

There’s also been some serious issues with the current tenants at my fiance’s rental property whom he shares with his brothers.

There’s no deadline, no rush to get married.  Part of me also wants to get it over with though. But as soon as that’s done with, you know they’re going to be bugging you about growing your family.

So those are the sort of wedding updates. Meh.

Here are some not so meh pictures taken on the day we went to check out our potential venue. 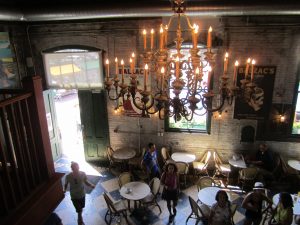 The inside of the coffee shop 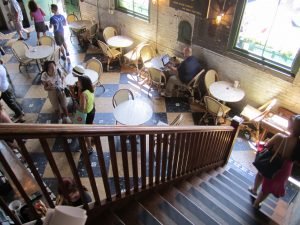 Imagine trying to go down that in heels or drunk. Yikes. 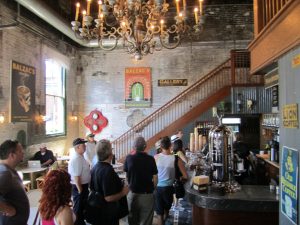 Yet another line. People waiting for coffee.