Last week, instead of deciding to watch another episode of my show of the moment (which is currently Heroes), I decided to watch a documentary instead. Had it not shown up on my feed, I would have never known that the documentary existed.

What confirmed my decision to watch it was just the title alone.

Living On One Dollar

The documentary was about four U.S. university students (Chris, Zach, Ryan and Sean) who traveled to the rural village of Pena Blanca in Guatemala in 2010 and lived like the locals for 56 days.

I know the general summary I just gave you about the documentary is nothing new  (the documentary was made back in 2010) and that many people spend their time volunteering is developing countries all over the world.  What I found to be very interesting was that they simulated their living situation so that it was quite similar to the way that many of the inhabitants were living- in extreme poverty or close to it.  In fact 70% of them live under the poverty line. A lot of the people from Pena Blanca were day labourers or farmers and had variable income.

The guys decided to live as close to the reality of poverty as possible with an unpredictable income. Rather than allocating a $1 each for the four of them per day for 56 days (total of $224), they instead split the amount in amounts of $0 to $9. Each day they would randomly pick an amount of the hat and that would be their budget for the day. They had also taken on a microfinance loan of $125 to buy a plot of land to grow radishes, which in turn eventually sell the radishes. The loan amount was also used to pay for shelter. Every 15 days they had to pay installments of $6.25 for the loan. 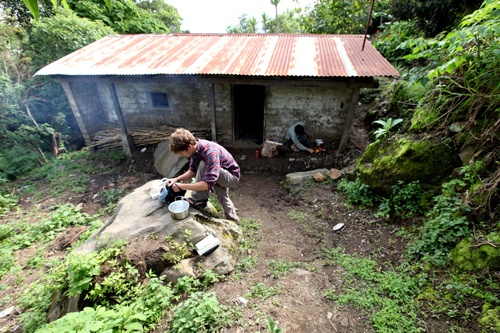 Both Chris and Zach had an economics background and spoke Spanish. They created a questionnaire that asked basic personal finance questions such as:

How much money do you make?

What are your expenses?

Where do you save money?

Do you have any outstanding loans?

With the exception of how much money do you make, I am more than willing to answer the remaining three.  Keep in mind though that I am a personal finance nerd/blogger and I enjoy talking about this type of thing. But not everyone does because it is quite personal and not everyone is that open and honest about it. I was amazed that the villagers had the courage to  shared their stories and their financial situations to two complete strangers and allowed the interview to be recorded.

A Great Idea- A Savings Club

One of the villagers, Anthony invited them over to dinner. Although he didn’t have much, he was so generous in that his family prepared a traditional Guatemalan dish called pulique. This dish is only served twice a year for special occasions.  Cooking was made easier through the purchase of a stove.

This was done through Anthony’s savings club. The way it worked was that the 12 of them in total each saved $12 a month. At the end of each month the $144 pool was randomly distributed to someone. The process continued until everyone had a chance to benefit from the large sum of money. It was much more useful than just the $12 alone, in that it helped pay for big-ticket item like the stove or pay for a wedding.

Unlike the majority of the people in Pena Blanca, Anthony has a formal job in which he receives a steady paycheque.  Someone in the community asked for Anthony’s help because his wife was sick and he didn’t have any money for the hospital or medication. Even though helping this man out would be putting some financial strain on Anthony and his own family, he still helped pay for the hospital bill and medication. This kind gesture showed the type of person Anthony was and the sense of community that was present in the village.

The guys looked into the process of getting a loan from a traditional bank. The requirements were items such as a copy of the amount of money you make, receipt of an electricity bill- things that people living in extreme poverty and working non-formal jobs don’t have. So they asked Rosa, another inhabitant of Pena Blanca if there were other resources to provide loans. She mentioned that someone else had told her about Grameen Bank which helps provide savings accounts and loans to the poor. They make it easier for people to apply for these things by only asking for a photocopy of their ID.

Rosa had to quit school when she was young in order to help support her family. She dreams of becoming a nurse. In  order to start the path to that dream,  Rosa took out a loan and started her own weaving business. She used the loan to buy materials and used the profits to pay for her high school education. According to a short film on the livingonone.org website, she is currently pursuing her nursing studies.

This is just one example of what providing people with access to credit and savings accounts can do.  Others have used the money to open stores, sell items such as wood and onions , make investments around the house.

Going back to the radishes- instead of their initial plan to sell them, Chris, Zach, Ryan and Sean gave them as gifts to people they interviewed. They also treated Anthony and his family to a pulique dinner on their last day in Guatemala.

And the end of the movie, it says “Small Changes Make Big Impacts”

I couldn’t agree with it more.

« Together in Love, but Separate in Finances
Rich and Fit 21-Day Challenge »