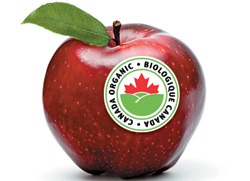 An apple with an organic logo

Organic food may appear to be fresher and of better quality, but does that necessarily mean organic food is healthier for you? It almost seems as if the idea itself is psychosomatic. You just think it’s healthier because it has the term organic attached to it. The way the animals are raised and slaughtered, the fact that the farmer is local, no pesticides are used-These aspects seem to put a more personal touch to it. This may cause us to think that oh wow, I feel so much better and healthier eating an organic tomato vs. a tomato grown with pesticides on it. Although I had mentioned in my first post about organic food supposedly tasting better, there is virtually no evidence that organic food is safer or more nutritious than the other kind (Wente, 2013). Furthermore, the American Cancer Society states that there is no evidence that residues of pesticides and herbicides at low dosages present in foods increase the risk of cancer” (Wente, 2013). Many detailed studies conducted around the globe have come up with the same results: organic food isn’t any healthier than food grown conventionally.

Here are what some researchers and key leaders in the industry had to say in regards to the comparison:

“In our view the current scientific evidence does not show that organic food is any safer or more nutritious that conventionally produced food.”- Sir John Krebs, former head of the U.K.’s Food Standards Agency (Luik, 2003)

“Hundreds or rigorous tests have failed to reveal better-tasting properties or improved nutritional value, but have consistently shown that organic produce has lower nitrate and protein content.” – Anthony Trewavas from the Institute of Cell and Molecular Biology at the University of Edinburgh (Luik, 2003)

Katrin Woese from Germany’s Institute for Health Protection of Consumers examined 150 studies comparing organic and conventional food. No evidence was present to support claims that organic food is “nutritionally superior” because better quality plants are produced through the manure decomposition that is vital to organic farming” (Luik, 2003). With the exception of nitrate and protein content and in regard to all other desirable nutrition values, no major differences were observed between organic and conventional foods or contradictory discoveries did not allow any clear statements (Luik 2003).

As someone having a scientific background, and reading about lack of scientific evidence to the “organic is healthier claim”, it seems as if people who pay for organic food are really only paying for the luxury of the label. The same reason why people buy Lululemon, but with the difference being that their clothing is superior in terms of functionality, breathability and quality. (I can say this because I have worn workout clothing of different brands and go through rigorous workouts. My Lululemon clothes are the only ones that provided the most durability, comfort during movement and performed the best). I have purchased organic bananas and conventionally grown bananas. Needless to say, I didn’t feel any better or worse when I ate the organic bananas. My health hasn’t improved due to eating organic food, but rather exercising intensely and regularly and eating everything in moderation.

When dealing with issues of world hunger and the cost of providing food to the masses, organic food seems only attainable to people living in developed countries or people of an affluent nature who are willing to shell out the extra dollars. The reason why it costs more because the growing process is more labour-intensive. It may be considered better for the environment, but shouldn’t good quality food be available to people from all walks of life, not just those who can afford it?  According to a consumer poll, “More than half of Americans think an  organic label is just an excuse to charge higher prices even though more people are concerned about the environment.” (Huffington Post, 2013)

The bottom line how I see it: Save yourself and your wallet by skipping the organic food. It just doesn’t seem worth it. I am NOT against organic food, I’m just against the prices they charge and the claims made, but lack of substantial evidence to back up the claim.

Do you consider organic food trendy?

I have never set foot in Whole Foods even though there is one that I could easily bike to from my house.

Wente, Margaret. “Organic tastes good, but better for us? No.” The Globe and Mail Accessed June 7, 2013

« Do You Believe in Luck or Do You Make Your Own?
Not Eating it All at “All You Can Eat Restaurants” »