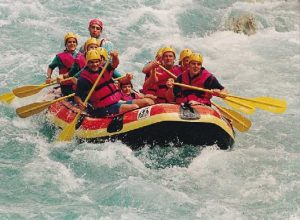 Editor’s Note: This article was originally published on Sept 2, 2012, and has been updated.

I know I had a pretty good childhood with very loving parents who wanted to provide for me as best as they could and that they did.  But sometimes I felt I missed out on certain things in my childhood. Things that many of you probably took for granted.

Although loving, my parents were also very overprotective of their first-born daughter, especially my dad. I wasn’t allowed to go to sleepover parties for quite some time. I was only allowed to sleep over at my cousin’s because they knew her parents. Initially, I had to have a chaperone at birthday parties. I wasn’t enrolled in organized sports because they were considered “dangerous”. I dabbled in various different sports in high school, but never found a particular sport that I could focus on in excelling in. I often wonder if I would have been a decent soccer/basketball/volleyball/tennis, etc player if I had started playing any one of those sports at an early age. Instead, I joined the dance team, student council, and the student newspaper to improve my chances of getting a scholarship.

I was enrolled in things such as piano (which I hated), dance classes (jazz I liked, ballet I HATED) and enrichment math classes (definitely hated that too). I had to beg my parents to let me go on a week-long high school trip.  I had to beg my parents to let me go clubbing. I didn’t  have the guts to sneak out.  So it was quite apparent that I needed to go away to university. Of course, my parents suggested local universities and disagreed with me applying to universities that were more than a 3-hour drive away. So we settled on a university that was an hour away. Far enough to be away from my parents, but close enough to come home on the weekends for groceries and laundry. This was the first adventure for me.

Living on your own in residence, being away from home and friends, juggling a demanding workload in a tough program, trying to make new friends- eventually, it all got to me. As many frosh had experienced, university life was a huge adjustment. The first year was a big adventure I did not end up conquering. I ended up switching programs, having to start over and make new friends, which I was never really good at in the first place. Eventually, everything did end up working itself out. I adjusted to student life, made a great group of friends and managed to finish my program, even though I knew it wasn’t what I wanted to do for the rest of my life.

My   husband lived a completely different life. He grew up with pretty laid back parents who let him do whatever he wanted. He played organized sports and did all the things that most kids were allowed to do. Sleepovers and birthday parties were never questioned. He was so comfortable that he lived at home while he went to a local university. I hate to say it, but he had the childhood I wanted. I actually envied him for being able to have so much freedom at such a young age.

When we talk about how we each grew up (and not too far from each other either), my bf says he felt he got all his sense for adventure out of his system at an early age.  I believe it had a lot to do with our individual upbringing and the fact that I was the first born daughter.  But also we are of different cultures. His dad grew up in Canada and his mom’s family has lived in Canada for several generations. Perhaps my parents felt they had already taken on so much risk by moving to a new country on the other side of the world (they had actually come to Canada separately and lived in different parts of Canada before meeting in Toronto).   Now that I am an adult, I almost feel I have to make up for lost time. Do the things that I never got to do as a kid and more.  I constantly want to try new things and go to different places.

Where has this sense of adventure taken me?

And now it has taken me down the entrepreneur path, helping small business owners increase their potential to make the bacon through blogging, branding and social media.  I feel that the older I get, the more risks I want to take and while I am terrified of the potential outcome, I do not let it stop me.

Live life with no regrets. All day and every day.