It rarely seems to come up in conversation. It tends to die off and never resurfaces. I try to find ways to include it in the conversation, but there never seems to be an opportunity unless I was to just mention it right then and there. It seems like it’s the last thing people want to talk about, when clearly we know it’s the most important thing we need to talk about.

Take for instance, my wedding.

How come nobody ever asks me about the financial details-such as how much my budget is, am I on track, how much did I spend on this, how much am I setting aside each month, etc. I suppose everyone thinks that it’s none of their business, but I’m sure it will come up in peoples’ conversation during cocktail hour and the reception.

I knew the moment I decided to have a somewhat traditional wedding, I would be judged on certain, if not all aspects.  Heck, I do it. Don’t lie, you probably do it too.

So this seems to be the only conversation I’ve been having lately, which I know is expected, but I wish the conversation could change to something else.  Why can’t we talk about what I love talking about?

Money. Saving. Investing. Learning as much about these things as possible.

In my post about my second investing class, I mentioned that the instructor had an investment club and it got me wondering/thinking/researching.

I looked up on meetup.com to find social money groups and investing groups because as far I know, most of my friends and family would never bother to talk about that kind of thing. At least to me. A lot of them do exist and the idea of meeting people who have the same questions, concerns, attitude towards money would be intriguing just as how it was in my classes. There just doesn’t seem to be a lot of them in my immediate area.

The big difference though is that it would be social. A social club. Like a book club, except people would discuss financial topics. Well, they could probably still discuss books, but just finance books.

I found this article on Business Insider that gives you tips on how to start a money club but it seems geared more toward starting a money club with your gal pals. I was thinking more along the lines of the meetup.com premise.

I’ve joined clubs in high school to make myself seem like the well-rounded student: the newspaper, student council, various sports teams and the dance team.  I did get invited to join the math club, but of course, in high school it wasn’t cool, so I went for one meeting and then bailed.

I tried joining clubs in university but for some odd reason with every club I tried to join, I got that feeling that everyone knew each other already.

How come I’m the only person who came by myself and doesn’t know anybody?   Meet new people my a$$.

Ok, so I have this weird aversion to clubs. I’m not even a member of Costco anymore. Although my fiancé and I may look back into jumping on that bandwagon again in the near future.

My crazy idea is that in the near future when I have more time (or I will try to make time) I will organize some sort of Money Club/Investing Club  where people in my area can gather and discuss topics that I talk about in my blog. It will be held during the week, once a month, or once every other month at some location. Maybe I’ll even go as far to have guest speakers in the industry or fellow personal finance bloggers in the area.

(Note to self: Must keep networking). 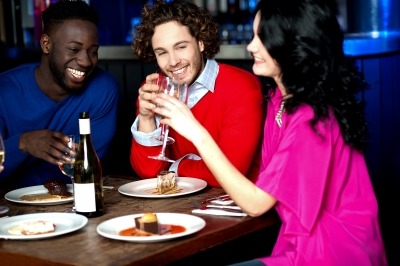 Maybe there will even be pizza.

At least some sort of snacks. So that shy or quiet or introverted people like myself will have an area to hover over and be able to keep themselves occupied until the session begins. Or at least until someone more outgoing strikes up a conversation with them.

Not everyone will know each other already.  Icebreakers won’t be necessary. Food is the best icebreaker of them all.

We will possibly pay club dues to pay for that pizza. I will be head organizer/president.  We will have a catchy club name.

Would you join my hypothetical money or investing club? Remember, there will be snacks.

« The Survey Results Are In!
Online Revenue and Blog Monetization Thus Far »