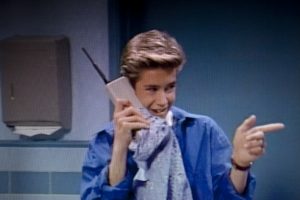 You’ve heard of the sensible advice: Don’t keep up with the Joneses’.

I will add to this: Don’t keep up with the Joneses’ and their technology.  While we rarely update our cars and houses, we seem to arm ourselves with the latest gadgets. Is it just me or do phones seem to be updated every 6 months or so? My salary doesn’t even get updated that often. Although I wish it would.

People want to upgrade their technology because it seems faster and better. It has more features. Oh look, it comes in blue and green now. Yes, I agree that technology is cool but you don’t necessarily have to follow it all the time to be cool. I have a Blackberry, iPod, digital camera and laptop and that’s about all I need. I have no desire to upgrade any of them because they all work fine.

How much bigger does your tv screen need to be?  There’s 3D, HD, and now there’s something called 4K in terms of screen resolution. Just how much more detail do you need to see on the screen? Remember when you had just ONE REMOTE? It takes me longer to turn on the tv because there are three or four of them and they all look the same. If I had it my way, but as you know in a relationship, there is this annoying thing called compromise, it would just be the television and the computer. I live with a tech nerd/geek, thus I have to live with constant updates to the television and my computer.

Back in the day, there was this thing called an electronic organizer. It looked similar to a calculator, but had more features. My dad had one. I thought they were so cool. Then came PDAs (personal digital assistants, not public displays of affection) such as the Palm Pilot. My dad also had a pager, before he got a cell phone.

Then came smartphones. Blackberries, iPhones, Androids. Yes, I will admit that using email and surfing the internet on your phone is pretty cool

The Forbidden Lovechild of the Phone and Tablet

Then this thing that resembled an oversized touchscreen phone or just the top half of a laptop came along. It became known as a tablet or an iPad, because Apple has to have their own name for everything. I’m surprised they haven’t created an iCar or iHouse by now. When I hear the word tablet, I think of biblical times and how the ten commandments were written on tablets. Now THAT was the first use of the tablet. Not only are there phones and tablets, there is also the product of a phone and tablet’s one night stand: the phablet.

I thought technology was supposed to move forward on all accounts, so isn’t making phones bigger going backwards? (See image at beginning of post for reference). Are they running out of ideas on how to advance technology that they’re just merging devices together and calling it something new and different?

Is Most Technology Unnecessary?

I can’t even understand the real need for a tablet. Except it might be easier to read recipes off of it than trying to keep your cookbook open with one hand and stirring your pot with the other. Is it like a glorified e-reader with all the bells and whistles? Sure, it’s lighter than your laptop, but I think people look silly when they try to take pictures with it. It’s as if they don’t want you to see them as their taking the picture. It also makes me think of photographers in a dark room when they hold up their developed photo.

When you think of how much technology has advanced and how much electronic devices we’ve accumulated over these years, it seems like such a waste when the perfectly older, but still good device  is tossed.  I highly doubt everyone recycles their electronics as much as they recycle their bottles and cans.

I feel like technology updates almost as fast a twitter feed. Who knows how many updates I’ve missed by now.

« The Ongoing Battle: Nerd Vs. Geek
A Trip Down Media Memory Lane – Part 1 »