Editor’s note:  The following post uses the word “shit” quite often. The editor apologizes profusely in advance to anyone who may be offended by the incessant usage of this particular word.  I have a potty mouth in real life, which I have managed to avoid in my writing. Until now.  But really, there are worse swear words that could have been used. Television shows allow so many of them now! Ahem, HBO.  That’s a damn good channel. Shit. Oops. Sorry.

For as long as I could remember, I was always busy. Growing up I had a lot of extra-curricular activities. I distinctly remember having the majority of my Saturday booked with dance lessons, piano lessons and math lessons.  Yes, folks, on top of having regular homework, my parents paid for me to have additional math homework.  It doesn’t get any nerdier than this. Oh wait, yes it does. I was the kid who actually requested homework to be brought home to me when I was sick.

In high school, I filled my spare time with extracurriculars to make me seem like I was a well-rounded student. I joined various sport teams in where everyone who joined pretty much made the team. I did brief stints with the dance team, student council and the school newspaper.  All while being on the honour roll.

Then university hit. And for various reasons such as being away from home for the first time, adjusting to university life, etc.; extracurriculars became non-existent for the first few years.  I was busy alright. With school. The school workload was heavy and intense.  I definitely do not miss the six-hour long labs. On a Friday afternoon.

I only got school shit done and found little time for anything else. Then in my later years, I found I had more time, but didn’t have that much of an interest to do extracurriculars.  Well, except curling.  That was fun.

Fast-forward to about six years ago when I first started training to become a fitness instructor.  The training process and learning curve was INSANELY huge for me. It took a good chunk of my time and often stressed me out more than my full-time job at the time.  I must have spent every spare moment I had trying to learn the choreography because it took me forever to learn it.

Fast-forward to just six months ago. I was taking an in-depth part-time web development course that had homework.  I was still working full-time.  I was still teaching part-time fitness classes.  I was still blogging.  And still sort of managed to maintain a house and all its duties.  Sort of.

Not too long after that, I was still doing everything above. Everything except the course, since it had finished.  In addition to this, I took it upon myself to take a few more coding workshops, job search and job apply to at least a couple of jobs every day, tweak my resume and cover letters constantly, tweak my LinkedIn profile, go to tech meetups and schedule career advice sessions with family friends and complete strangers (notice how I don’t mention anything about wedding planning because that was pretty much non-existent and will be discussed in a future post). I will admit that those four months will be classified into the group of gruelling, tough moments in my life.  It was nowhere near easy, but eventually it paid off.

If it sounds like I’m trying to brag about how I get shit done, I’m sorry. I don’t mean to brag. There are people who do as much as I do with kids and more.

There have been several times when friends, coworkers and family members have asked  “How Do You Manage All That?” or “I don’t know how you do it” or my favourite, “You’re crazy.”

It may have to do with the fact that I was brought up to be busy at an early age. To be honest, I don’t remember a lot of randomly playing in the park or yard (but I’m sure there were some great moments), but more of practicing the piano and dress rehearsal for my dance recital.  Looking back at it now, I am truly thankful and lucky to have been given the opportunities to experience these things.  A lot of after-school activities aren’t cheap. Although there is the Children’s Activity Tax Credit, I don’t recall that ever being around when I was a kid.

I think the wanting to get shit done (a lot of it, for that matter) has to do a lot with my overachiever/somewhat competitive personality. I like to call this “WonderWoman” or “SuperHero” complex. I just so happen to like the DC and Marvel Movies. I even went to Fan Expo last year.

I also like to try to learn new things. I have a lot of interests.  Which I think is a good thing, in that you can find more stuff to talk about with people (which helps with my shy self). It could also help discover or re-visit your passions. Or in my case, launch a new career. If it’s something you like and if it’s something important to you, you’ll make the time.

I do like tv, but I don’t watch a lot of it. Sometimes there will be some evenings where I don’t watch any tv.  I sometimes use watching tv as a reward to myself.  I’ll pack my lunch and prep my clothes for the next day first and then go sit down to watch tv. It may sound weird to you, but it works for me. I don’t feel so guilty and I feel satisfied that I got some shit done.

Like many people, I try to run errands before work and during my lunch (ie mailing letters/cards, banking, mini grocery shops, phone calls). Now that I’m commuting to work via public transit, I get a few things done on the train.

I multi-task, but not the crazy version of multi-tasking. I think the most tasks I do at a time is three. For example, while my laundry is going, I’ll be listening to music for my class and checking emails.

Since my side job involves a workout, that kills two birds with one stone.  Although I try to fit in my own workout when I can.

I know when I’m most productive. Usually mid-morning. I know to usually leave the activities that require the least amount of brain power till the evening (oddly enough, I am writing this close to my bedtime).

I make the lists. I like crossing them off.  I have the reminders in my Google Calendar.

Everyone is busy. So how do you get shit done? 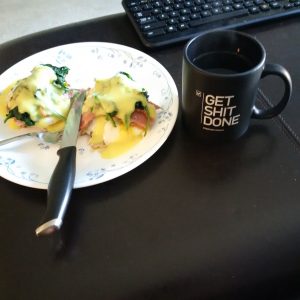 « How My Job Saved Me Money
Get Shit Done- Wedding Version »