Do you remember back in the day, when kids would bring their parents in to school and they would describe their jobs? In high school, there was a day called “Take Your Kids  to Work Day”? At the organization where I work, we have a job shadowing project in which employees can sign up and can paired up with someone based on their choices.

Today’s post is a blog version of all those things and what I hope to be a series of many. Since my blog is called “MakintheBacon”, I figured it made complete sense to learn about other peoples’ careers, essentially, what they do to “make the bacon”. 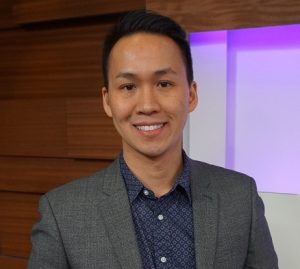 To kick off the career series is Barry Choi, who is a Personal Finance and Budget Travel Expert at Money We Have. During the day he’s a Director at a television news station in Toronto. You can follow him on Twitter @barrychoi.

It kind of happened by accident. You could say I hung out with the wrong crowd in high school and I didn’t exactly have the best study habits, but my high school had a television production class that I excelled at. When it came time to apply for university / college, it seemed like a natural fit for me to apply to a broadcasting school.

As a Director I’m responsible for the overall look of a newscast. All newscasts have their own style so I’m more of a traffic cop than anything else. That being said I do work directly with the Producer to make sure that the technical side of things actually happens the way it’s supposed to. I also work with the talent to ensure they know what is going on.

There’s a morning meeting where the Producers will talk about the stories of the day and then assign a reporter to those stories. Throughout the day news happen so if something major happens, reporters will be reassigned. After they have gathered their elements and if time permit, they come back to the newsroom to write / edit their stories. If time is an issue they may “feed” their story back from one of our live trucks. At the station the production and technical crews are prepping for the newscast and just making sure everything is ready. Come show time many elements are usually still not ready, so it’s our jobs to make things still look good. In other words the public should never be able to tell when something has gone wrong or is missing.

When live breaking news happens, we’re dealing with things as it happens. There is no time to research, or to prepare, it is happening now. If it’s something major we’ll send as much resources as possible but sometimes we won’t know how serious the news is until we arrive on scene. This is all happening while we’re trying to continue on with our regular newscast. There’s a lot of technical stuff that needs to happen before you see it on your TV, plus we need to get as much information as possible before we share it with the public. Nothing is worse than giving the audience bad information.

Well it’s like I get to have a chat with them but the one person I saw at work that made me stop and go “woah” was Samuel L. Jackson. Other celebrities I’ve come across while working include: The Queen of England, Prince (the musician), Justin Trudeau (the night he was first ever elected to office), and Tom Cruise

I do some on camera stuff on occasion but format changes have reduced that exposure. Although I’ve never been formally an “on-air” talent, it kind of works out since there is less of a worry about conflicts of interest with my personal blog.

Have a backup plan and have more than one skill. This industry is rapidly changing. The CRTC just changed the rules of how television is provided to consumers making it harder for broadcasters to make money– as you can imagine this will eventually lead to job losses. The more skills you possess, the more valuable you become.

« Online Revenue and Blog Monetization Thus Far
C is For….. »