Aside from being social on social media, you can also be social within their specific social media groups. I don’t know about you, but that sounds like social media inception to me.  Not all social media groups are created equal and their purposes vary from group to group. Some are meant more for a community and seeking out advice, whereas others are more for promotion.

While I’m not a big fan of Facebook itself, I am in love with Facebook Groups. They have been insanely helpful in answering my questions and providing me with support and useful advice. Not only that, I have been able to find people within the Facebook groups I’m in for various collaborations. People within the groups have been nothing but nice and very knowledgeable. There is no such thing as a stupid question. It’s completely fine to ask a question that has already been asked before. You can even post the same question in several different groups if you want to increase the chances of getting a response or a variety of responses.

There is a multitude of Facebook Groups out there for practically every niche and I suggest joining a few,  ie 2-3 to start to see which ones are a good fit for you.

It’s important to be cognizant of the group rules. Some groups don’t allow self-promotion at all, whereas some groups have specific promo days and promo threads. Be sure to read what exactly you are allowed to promote in that particular thread.

If you are a blogger, blog for business or own an online business, here are some Facebook Groups worth checking out:

My Pro Blog + Biz with Erika Madden of Olyvia.co

While they are useful for creating conversations, growing your online brand and e-meeting people, the conversation moves pretty fast. So fast that I feel it can be easy to miss other participant’s responses if you’re not paying attention, even if they include the hashtag. With your tweets, you have to remember to put in the specified hashtag for the chat or else people won’t know it’s part of the chat.

Since you are limited to a certain number of characters (hashtag included), your responses either have to be short or broken up into several tweets. It’s personally not my favourite type of group, but I know some people really enjoy them.

The Huffington Post provides a list of Twitter Chats for entrepreneurs and a brief description of each here. If you’re planning on joining several Twitter Chats, I would recommend marking them in your calendars ahead of time and set a reminder a couple of hours before they start. 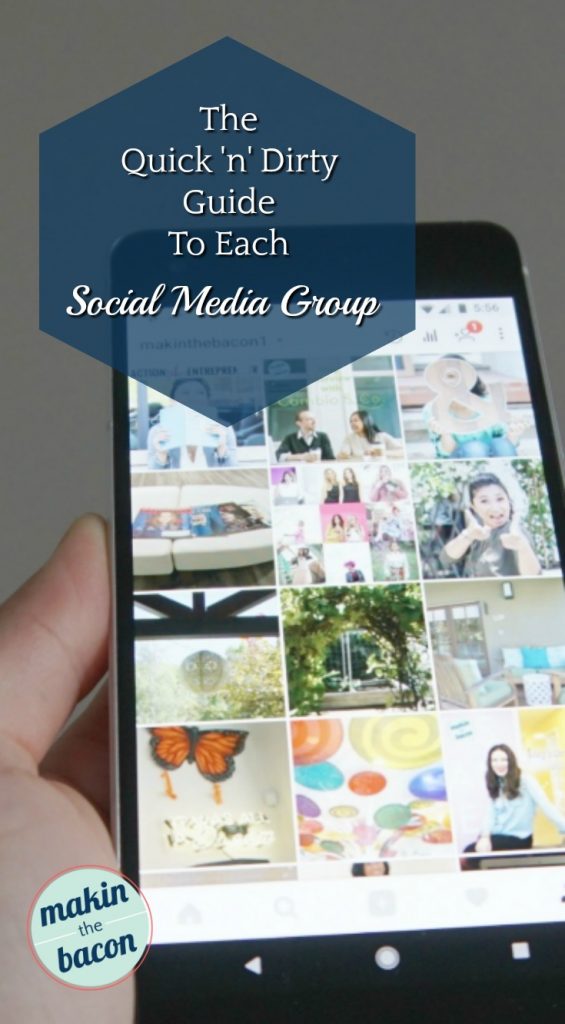 An Instagram pod is the newest type of group on the block and is useful for gaining more followers and creating more engagement for your posts. Each pod is limited to 15 people and has their own set of rules that you need to follow. I was in one pod where the expectation was that everyone had to follow each other. With another pod,  there was no indication of the need to follow other members of the group.

At first, it was fun getting all the likes, authentic comments and e-meeting lots of different people. Over time though, some people would either still leave one-word comments or the same three-word comments over and over again, which I found to be annoying.  I also found it to be a lot of work having to comment on a lot of different photos every day.

The pods weren’t very niche specific either. If you are considering joining an Instagram pod, I strongly recommend looking for ones that are related to your niche. This would probably benefit your business more in the long run. I  don’t mean to sound negative about the pods, because I absolutely love Instagram. It is my favourite social media platform. I just felt the pods to be very time-consuming. They didn’t do much for me. At the end of the day, I would prefer to like photos I actually like and not feel like I had to write a comment just because.

I’ll be honest. I used to think that Pinterest was only for crafty DIY people, which I am not. My husband is the DIY one. It’s in his genes. He has DIY genes from BOTH sides of the family. Then I decided to get off my high horse and give Pinterest a try. Pinterest group boards are great for sharing your own content – your pins end up getting seen by a larger audience vs. just pinning to your own board. It’s important to also share other people’s content as well and re-pin the pins within the group board.  Again, each board has their own rules – some only allow one pin a day. Some have no limit.

You’ll often find people within the Facebook Groups mentioning that they’re looking for people to join their Pinterest Group Boards.  Take a look at the people you follow and check out what group boards they belong to.

Some Pinterest Group Boards That Are Related to Online Business and the Blogging Process:

Tailwind – the scheduling tool for Pinterest also has their own group, known as Tailwind Tribes. When you subscribe to Tailwind, not only can you share your pins on various boards, you can also pin them to the tribes you belong to. I highly recommend it.  With respect to pins, it has been such a huge time-saver in that I’m not manually pinning every single pin.

This is the one platform I have not experienced a lot of traffic or engagement from. When I first started out my blog, I had a Google + account but did not find it to be very useful. I joined a few blogging communities but found very little engagement in them. I could be wrong, but I feel that Google +, along with its associated communities is just not the platform to increase your online exposure.

I have only recently begun to use LinkedIn for my business and have joined a couple of groups to start off with. The groups page can be found by clicking on the Interests link in the navigation menu. The groups page lists the groups you belong to and suggests other groups that you may be interested in. Since LinkedIn is a professional network, there is also a jobs tab in the groups where members can advertise relevant job postings.

Just like the unofficial rule of focusing only a few social media accounts, don’t feel obligated to join every single type of group listed here.  Join a few and take note of which ones are either giving traffic to your site, exposure, helping you network and providing you with potential opportunities. With anything related to having a business, it’s constant trial and error.  I tend to focus most of my time and effort on Facebook groups and Pinterest group boards.

Which particular groups have you found to be the most beneficial to you and your business?

« Why Quitting Is Acceptable
Guest Post On See Girl Work: How to Self-Promote When You’re An Introvert »