Welcome to the final installment of my trip. The last part of the trip was spent in Athens where we took in a couple of museums, checked out the Acropolis, made a day trip out to the sacred site of Delphi and ate a ton of souvlaki on our last night.

Although we went to Greece the end of May, I found it still quite hot. I’d say the average temperature was about 25 °C. Our tour guide in Delphi said that in July and August, the average is 38 °C. Yikes. That’s like having a fever! There were quite a few tourists, but apparently not as many during the high season. The thought of an even bigger crowd makes me claustrophobic.

Some Sites we checked out:

National Archaeological Museum – easily accessible via Metro and worth checking out. It is considered one of the world’s most important museums and has a vast collection of artifacts from Greek History.

Acropolis Museum– a smaller museum with surviving artifacts from the Acropolis. You can breeze through the museum in a couple of hours. I found I enjoyed the National Archaeological Museum more.

National Gardens– This attraction was not originally on my list. We had stumbled upon by accident on our way to the stadium of the modern Olympics. It’s free to get in and a great place to seek refuge from the blistering heat.  This place is huge and perfect for a leisurely stroll.

Acropolis– A must see. It is deemed as the most important ancient site in Western civilization and is where the Parthenon sits. I highly recommend buying the Acropolis pass, which not only gives you access to the Acropolis, but access to other sites such as the Ancient Agora, Temple of Olympian Zeus and Hadrian’s Library.

I had originally planned to book several tours back to back to get the most out of my trip, but in the end I decided to play it more by ear. I’m glad I did because I wanted to give myself some time to relax. The heat and long days exploring the city took a lot out of me. Booking several tours also meant a lot of money. Prior to leaving, I had purchased a Lonely Planet Guidebook to Greece. All I can say is, best $30 spent. The guidebook was basically our tour guide in Santorini and Athens.  It also provided several eating options.

My biggest regret? Not getting it sooner to help me plan my trip.  It mentioned quite a few sites that I had never thought to go visit. I thought we could make a day trip out of it, but turns out, it’s best to give yourself at least a couple of days to visit Northern Greece.

Would I go back again? Definitely. I would probably skip Athens and explore more of the islands and Northern Greece. 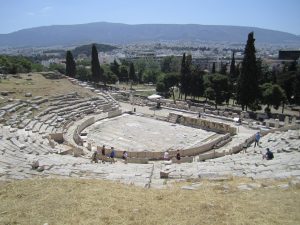 Theatre of Dionysus- God of Wine, Theatre and Fertility. 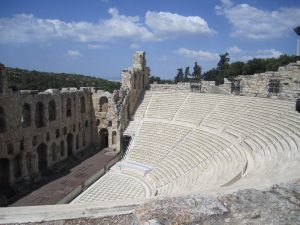 Another theatre- The Odeon of Herodes Atticus 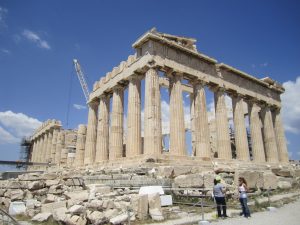 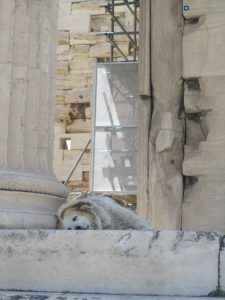 I felt like this dog as the end of the day 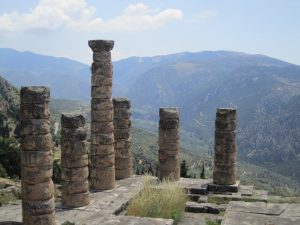 The Ancient Site of Delphi 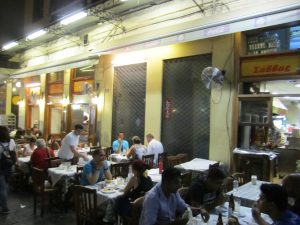 Where we had our last and biggest meal

« Am I too old for Life Insurance?
Gift Cards Can Also Be An Inconvenience »