When I had done my backpacking trip to Europe after graduation, Greece was on my list of countries to visit. However, due to time and money constraints, it got cut from the list. After reading great things about Iceland from Well-Heeled Blog and Tonya from Budget and the Beach, I was strongly considering Iceland. However, my love for Greek food, the beautiful beaches, fascination with Greek mythology and ancient ruins made me choose Greece as the final destination.

Surprisingly there was no direct flight to Athens. We got on a plane to Montreal and low and behold,  two Canadian icons, DON CHERRY and RON MACLEAN were on the same flight! I couldn’t stop staring at them the whole time as we waited to find our seats (in economy of course, they were in business class). I immediately texted almost everyone I knew. My dad told me to tell them that he was a fan of Coach’s Corner. Unfortunately, they were already off the plane by the time we got to the front.

The flight to Athens was pretty long (about 10 hours) and the time difference is 7 hours ahead. We arrived in the morning, so our room wasn’t ready yet. We killed some time by walking around the nearby marketplace. At that point, all I was looking forward to was a nap.  I can’t sleep solid in my own bed, let alone on a 10 hour flight in economy class.

We had one night in Athens before we took the ferry out to the island of Santorini (!). Our hotel was in a touristy area, which meant several of the major sites were within walking distance and we were close to the Metro. Dinner was good, except for the annoying gypsies and people who try to sell you things while you’re trying to enjoy your dinner. The restaurant owners are constantly shooing them away like flies, and at the same time they’re trying to sell you the idea of eating at their restaurant versus their competitors next door and down the street.

Our ferry ride was scheduled for departure around 7:30 am the next day. It was an early trip and a long trip (about 8 hours) which involved stopping at other islands on the way to Santorini to pick up and drop off passengers. It was nice in the sense that the ferry was more like a mini cruise ship and that we got to see an overview of the islands, but the next time I go ( I really want to go back), I would spend the extra Euro and fly to the islands. The flight from Athens to Santorini is only 45 min. So 45 min vs. 8 hrs….hmmmmm…. 😛

Here are some ferry trip pictures (click to enlarge): 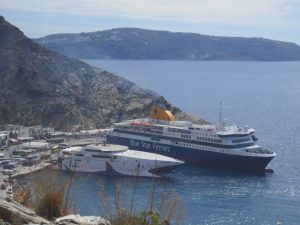 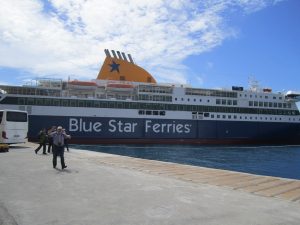 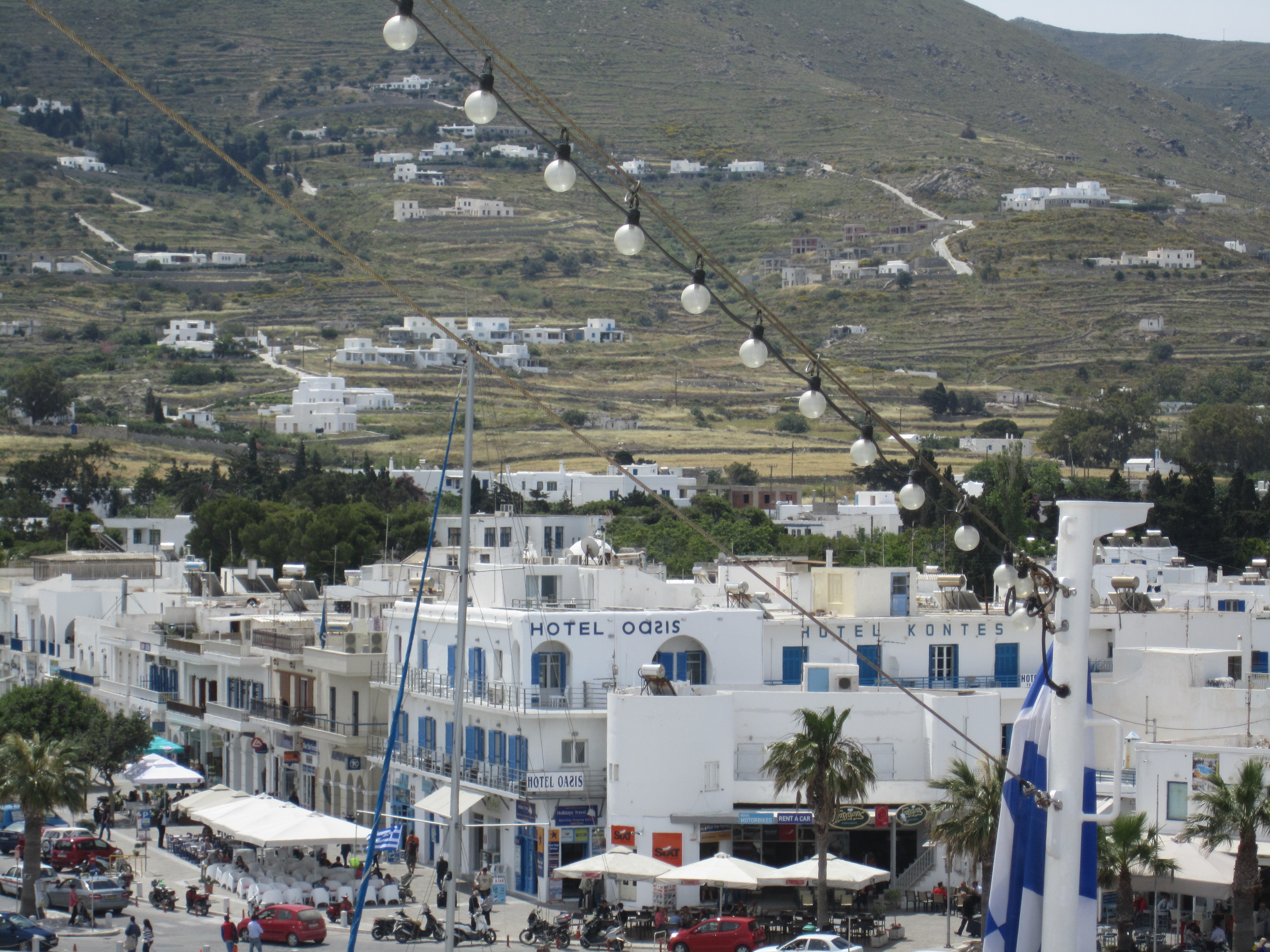 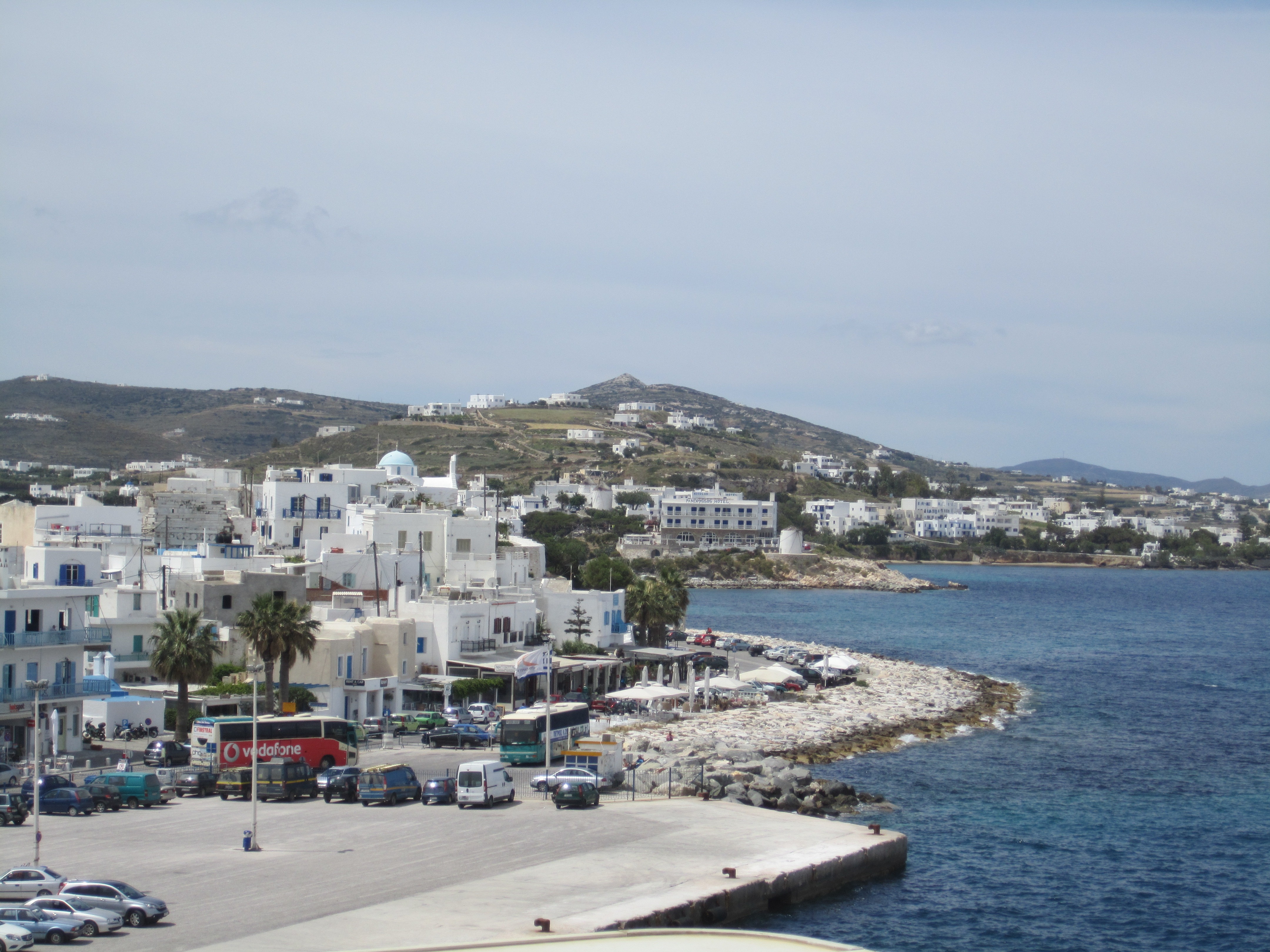