In my year in review post, I had mentioned running an obstacle course in the mud.  Well it happened last weekend.  A group of us decided to get down and dirty at Mudderella Toronto (more like Bingemans Centre in Kitchener).

I had ran a similar obstacle course a couple of years ago with my sister and brother-in-law called Mud Hero. So I was itching to do another one.

Getting everything organized before the race took a bit of time, so they recommended getting there an hour earlier before your time.  It took some time to get there, find parking, register and check bags. I personally think the registration lines could have moved a lot faster if everything was done electronically, such as submitting your waiver online.

The majority of teams wore t-shirts/tanks of the same colour with team names and/or logos on them, which I thought was pretty cool. Some teams even wore tutus and colourful knee socks. Our team wore white tanks/tees with the name “Running  Addicts” on it. Of course, they didn’t stay white for very long. 😛

The sun was really beating down that day, so the idea of being able to cool off in the mud actually sounded appealing. The course was 9 km long with 13 obstacles.  Some of the obstacles included crawling under barbed wire, climbing walls and going down slides.  I personally thought the obstacles were easy with the exception of the one where you had to walk across a bunch of tire swings. It is WAY HARDER than it looks.

Check out this YouTube video to see how much fun it was and how dirty you get:

With respect to the running, the course was mixed terrain. I felt like there were a lot of hills which made me hate the running even more.  You had to be really careful in some areas because the ground was either sloped, uneven, muddy or all three. One wrong move and you could wind up twisting your ankle.

Throughout the course there were several water stations, which I really appreciated.  At one of the water stations, we got half a banana which helped a bit because although I had breakfast, my stomach was growling by the time we were ready to run (I had a banana as part of my breakfast that morning. Aside from a t-shirt and bandana, we received a full banana at the end of the race. So I had two and half bananas that day).  At one point, there was a kid spraying us with a supersoaker. At another point in the course, there was a kid spraying us with a hose.  It was very much appreciated.

Rather than being a competitive race, it was more about completing the course and completing it together as a team, helping out fellow  Mudderellas and being strong women.They had inspirational signs throughout the course, which really helped motivate me, especially during the run up a VERY STEEP hill in the blistering heat.

My most favourite obstacle was the last one. It consisted of climbing a cargo net of about 15 ft (?) and then going down a steep slide into a pool of water. Fellow Mudderellas mentioned to plug your nose for the final obstacle. That made sense because as soon as you reach the pool, you end up being completely submerged underwater. 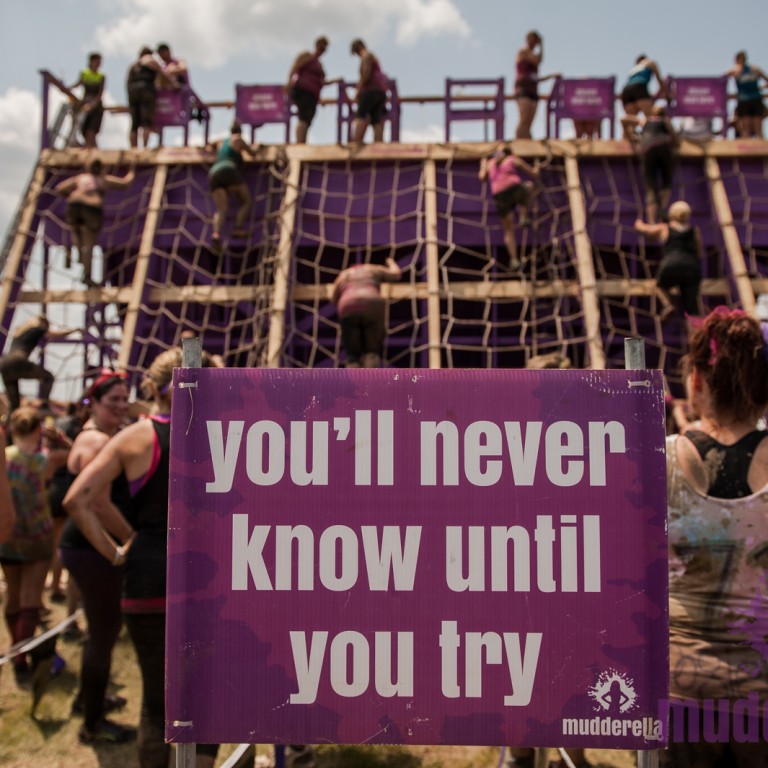 The majority of the runners were women, but there were a few guys participating. The rest of the guys were watching by the sidelines, cheering on their wife, girlfriend, friend, sister, daughter, etc.

I should note that I didn’t do any specific training for this. Since I do teach fitness classes several times a week, I workout hard and consistently.  I know I probably mentioned this already, but I’ll say it again, try yelling/talking the whole time while you’re going hard in your workout in order to get an idea of my workout.

If you’re not a fitness enthusiast or not active on a regular basis, I would recommend to try and get some training in a couple of months prior to the event. The  Mudderella website has a training guideline.

A couple of ladies were wearing GoPro cameras on their  head to capture the event live.

All in all it was a VERY LONG day and I was exhausted by the end of it. Of course, it was also a lot of fun.

Would I recommend doing it? Yes, it’s fun and something different to do with your gal pals.

Would I do a mud run again? Probably, but I think I’m ready to take it to the next level. Dare I say I am now considering training for a Tough Mudder? Just need to find a group of people who are crazy enough to do it with me….