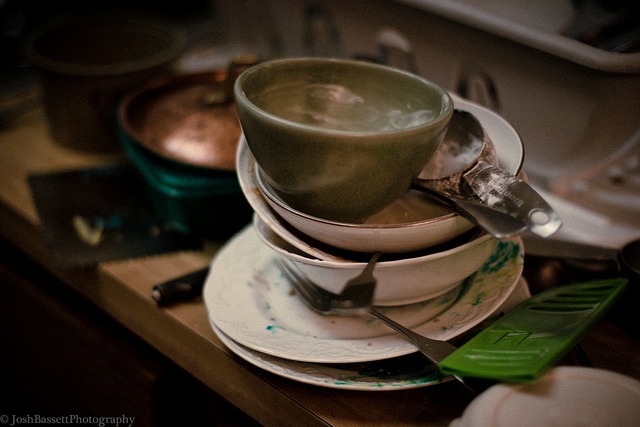 There. I said it. Are you a germaphobe? Are you grossed out and refuse to read on?

I used to (and still am to a certain extent, especially when cooking) be one of those people who would use a dish, cup or fork for one little bite or sip and then toss it into the sink. When we first moved into our house, I did this even more because we now had a dishwasher.

Neither my partner nor I had a dishwasher in the household growing up. I didn’t have one in my apartment either. Let me just say, along with the microwave and washing machine, the dishwasher is up there in terms of best inventions ever to save time and money.  I HATED washing dishes growing up and dreaded having to wash them in my apartment kitchen sink when I got home from work.  They always took up so much of my time. I never seemed to wash them right away. I always had this (and still do a bit from time to time) tendency to just let them pile up like a tower of Jenga blocks just before it topples over.

My significant other, on the other hand, would use his plate, glass or bowl more than once (maybe even three times) before deciding that it would need a wash.  At first I was appalled and grossed out by this because I grew up with the notion that dishes and cups were used only once before washing. Things would get left on the counter and get automatically washed before I could even think about using them again. They were automatically assumed to be dirty.  Once they were put in the sink, it was a sign that you couldn’t use it again. My dad was a bit of a clean/organized freak, so maybe that was why.  That got passed on to my sister, but unfortunately not me.

She even offered to organize my house for me and that offer still stands.

When I brought this habit into the household, my partner claimed I went through way too many dishes, cups and cutlery at one time.  He’d ask why our dishwasher got full so quickly and so frequently. We’re only two people. Being the practical guy he is, he would point out that rather than letting those cereal crumbs solidify on the bowl, I could have easily given the bowl a quick rinse and use it the next morning.

It makes common sense and financial sense too. I wear my clothes (with the exception of undergarments, workout gear and socks) more than once if they don’t stink and have been barely worn, then why can’t I do that with the plates I eat on? Less stuff used to be eaten with, hence less things going in the dishwasher. The dishwasher is used less frequently, thus saving us money on our electricity/water bill.

It took a while like it does to change any habit, but I now often rinse my stuff a few times before throwing it into the dishwasher (although not as much as my partner). Sometimes if someone eats dinner before the other person comes home, due to after work activities, the other person will just use that same plate. No muss, no fuss.

I guess I’m somewhat of a hot mess in the kitchen, but a neat freak in my finances. 🙂

Note: This is only something we do amongst ourselves. Obviously, I wouldn’t give my house guests my rinsed plate. 😛

« Who Doesn’t Have A Bank Account +$100 AMAZON VOUCHER GIVEAWAY!!
Lottery Tickets: Are They a Waste of Money? »