I first read about Fix the 6ix in a Metro article while waiting for the GO train.  As soon as I had finished reading the article, I made a note in my phone to contact the founder, Deanna Lentini for an interview. This young woman was someone with a heart of gold who went the extra mile and beyond that. Without a doubt in my mind, she was definitely someone worth interviewing for the blog. 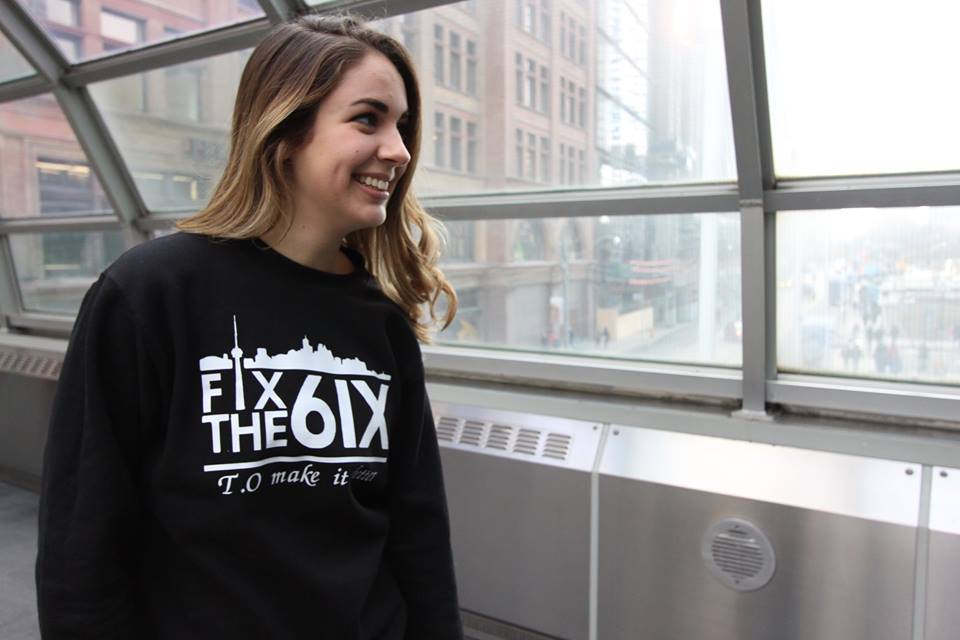 While the majority of topics in personal finance blogs are about budgeting, saving, investing and creating more wealth, I wanted to touch on some of the lesser spoken about topics such as poverty and donating to the less fortunate.

Deanna is no stranger to that. Growing up, she says she would always ask her parents for spare change to give to the less fortunate. She could never walk by homeless people without donating something. As she spent more downtown and while she was in university, she continued the kind act of giving coins to the homeless. Rather than having to fumble with her wallet, she was ready to give with coins already in her pocket.

She eventually thought to give away her $5 Tim Horton’s card, because  she could afford a coffee either way.  To her, it didn’t cost her anything to give the person her gift card and it’s more than a loonie. From then on, she began to give away her gift cards she would receive. Deanna also asked her sister and parents to donate their gift cards, so she could give them out downtown.  She started playing with the idea and thought she could something more with this because everyone had gift cards.

This eventually turned into the Re-Gift Card Program where people can donate their new and/or partly used gift cards that they haven’t had time to use.  The Fix the 6ix brand was created to generate a broader reach and show how passionate she was about Toronto.  Deanna wanted to engage the people of Toronto through the re-gift card program.  Fix the 6ix fully utilizes the gift card to help provide food, clothing  and other necessities to those in need.

Aside from spearheading the Fix the 6ix program that is run by volunteers, she is a full-time student in her last year at York University. On top of that, she is also on student council. When asked how she is able to juggle all these activities, Deanna responded,

[Tweet “When you’re really passionate about something, there is always time for it.”]

While interviewing her over the phone, I could really hear the passion and determination in her voice when talking about how much she loves the city and wants to make it better.

The goods purchased for household items, clothing, and hygiene items are donated to Sistering, a 24 hr women’s drop in. They offer their services to women who are homeless and women who are not homeless. With respect to food items, these are purchased by the volunteers and directly given to people living on the street.

When asked about Toronto’s poverty situation, Deanna says, “I think there’s always room for improvement.Last year Toronto released its reports for anti-poverty strategy. So I know that there is that intention to move things forward.  So I think that this kind of mirrors that, what city hall is noticing, the people are noticing. And what city hall wants to change, the people want to change. We can really improve that. “

The majority of gift cards are overwhelmingly Starbucks and  Tim Horton’s.  As of this interview, Fix the 6ix had collected 222 gift cards. Among those cards were fast food gift cards and one from Ikea. They’ve also received a lot of Cineplex cards. Deanna worked with a charity called Angel Foundation which subsidizes school trips, band camp, etc for vulnerable students. Her idea is that if the teacher applies for a subsidy for a trip to the movie theatre, then they could give them the gift cards and assist the charity with the subsidy portion. That way, every single gift card donated can be put to good use.

Although the gift card drive on the York University campus has come to an end, people who would still like to donate their new and partly-used gift cards can get directly in touch with Fix the 6ix to schedule a pick-up in the city. To make it more convenient for donors, in the summer there are plans to expand the gift card donation box locations to retail locations across the downtown core such as cafes and ice cream shops. If you are a small business, club, school, place of worship, etc and  would like to host a donation station, click here for more details.

With respect to verifying the amounts on the gift cards they receive, they will be sorted and organized into a  shared Google doc spreadsheet. Volunteers will call the numbers on the back of the gift card and online to verify how much is left. These amounts will then be entered into the spreadsheet.

Fix the 6ix will look into selling the sweaters, just like the one seen in this post, on their website come end of April. Deanna mentioned they have been selling sweaters on campus to students as the fundraiser and lots of people on campus have been asking for them. She commented on how it’s  really nice to see people wearing them around the campus.

Just as I consider the MakintheBacon blog to be my baby, Deanna considers the Fix the 6ix project as her baby. So the million dollar question was: “What are you hopes and dreams for the Fix the 6ix?”

“My dream would be if we can establish as a charity, that would be my biggest hope. That’s the advice I’ve gotten in the non-profit, is that it’ll give us the legs to do more good work. What I want, honestly, my dream for it would be   If these boxes get popular, and that they are around the city enough, that if people get their gift cards and they’re leftover, it’s an automatic I should give this to Fix the 6ix.  Save your gift card. That’s what I want. I want it to be something people in Toronto would think of.  Save your gift card. Just bring it to the library next week, donate it there.  I just want it to be something that Torontonians are in together, trying to do something good with their leftovers, you know, automatic.”

Save your gift card. Give it to the Fix the 6ix.

#throwbackthursday🔙 - Sharing a couple of @uofw