I  recently received my bill in the mail for taking the 407 ETR (express toll route). For those of you are unfamiliar with this highway, it is a highway in Ontario, Canada where in order to you use it, you have to pay a toll. Unlike the U.S., Canada doesn’t have toll roads within a province or between provinces.  The 407 ETR has cameras set up above the on ramp and off ramp to track your distance. It is considered to be the world’s first all- electronic, barrier free toll highway.

Frequent users have an electronic device called a transponder that is mounted behind your rearview mirror (Since I am not a frequent user, I don’t have one).The annual fee for a transponder is $21.50, whereas the monthly fee is $3.40. These fees are set regardless of how many trips you take within the year or month. According to the website, if you travel more than six times a year, you can save money and avoid the video toll charges. The video toll charge per trip is $3.95 per trip. I used it twice on that day, so my video toll charge was $7.90.

The website has a rate chart that shows the cost per km with using a transponder vs the video camera recording your license plate. The rates are somewhat similar to hydro usage in that they have midday rates and off-peak rates. The highway has two zones, a regular zone rate and a light zone rate, with the regular zone rate during peak hours and peak periods, which seems kind of confusing to me. There are also different rates for the type of vehicle you drive onto the highway.

There is even a toll calculator on the website where you can calculate the estimated cost of your trip.

Mind you, I didn’t even think of calculating the cost of the trip before I decided to take the ETR. I was more concerned about trying to find the quickest route to get to a friend’s wedding on time. The location of the wedding was quite far from where I lived, but still within driving distance. If I had calculated the estimated cost ahead of time, frugal me would have said forget it and make an effort to find an alternative route.

While millions of people commute everyday to and from work and sit for long periods of time in traffic (only to then sit for long periods of time at a desk) my partner and I are lucky enough to not have to deal with it on a daily basis. A round trip commute for me ranges from 30 -45 min, depending on what time I leave from work. Due my extra early start, the traffic in the morning is almost non-existent.

Long commutes leave people feeling weary, exhausted, frustrated and starved for time. I know. I’ve been there. My round trip commute for my first professional job was two hours worth of driving. I felt exhausted before I even began my day at work. Even taking public transportation can be tiring. I took three buses to get to one of my co-op jobs. The whole trip was an hour each way. 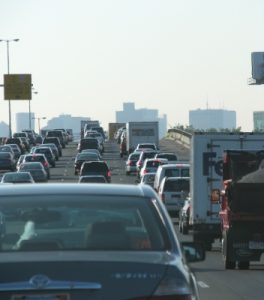 We always want more money, yet on many occasions, we have to put in more time in order to do so. How often have we complained about wanting more time?  Many of us are working towards have both more time AND more money, but not without putting in a lot time first.

The few times I have taken the 407ETR, during the week and weekends, the traffic has always been light. I love the fact that the ride is smooth and does not feel like you’re in a parking lot. The whole point of the ETR is to reduce your commute time. However, gas is already expensive enough, without having to pay more money for your commute. This is probably why the majority of people choose to take the toll-free highways, but run the cost of hitting traffic during their commute.

Time does have a price. Would you pay for it in terms of your daily commute? Why or why not?

« Sort of Wedding Updates
The Costs of Being Sick Adds Up »