Alright, it’s time to air out some dirty laundry. The gorgeous sunny weather in February is perfect for it.

What is that you ask? I just made it up and I’m going to make up the meaning as well.  I consider it to be the term for anyone who is great need of money and refuses to work low-paying jobs, retail jobs and jobs in the food service industry or someone who looks down on those types of jobs mentioned. Not sure if the term actually exists but maybe check urban dictionary.

But that sort of described me in my early-mid 20s.

As a kid, I barely worked. I worked extremely hard in school, yes. But I rarely worked outside of high school and only worked during my co-op terms in university. The only times I had a job in high school were during the breaks and part-time during my last year. My parents had it ingrained in my brain that if I worked hard in school and got into a good program in a good university, I will get that job, or at least get the job that will lead to the amazing one. I won’t ever have to work in a low-paying, minimum wage job in my adult years because I’ll have obtained a valuable degree.

So once I graduated from university, I too believed that because I had an honours degree from a prestigious university and almost 2 years of relevant work experience, I would get a great entry-level job into a big company and all would be well.

It took me almost 6 months to get a job.  In hindsight, I could have worked a retail job, a part-time job, anything really while I applied to professional positions to help pass the time. I could have made some extra money. I could have saved some money and started investing earlier. Hindsight is always 20/20. Damnit.

But no, instead of trying to land a job right after graduation, I decided to backpack through Europe.  No regrets there. Would do it again. Kind of want to do it again, except stay in a single room in a hostel because I can’t function ( and never really could to be honest) on just four hours of sleep in a room with 7 other people.

I  had nothing lined up for me when I got back home. When I finally did land a job with a big pharmaceutical company, I had only stayed in the position for 8 months, because I was already bored and wanted something more technical. The subsequent position was more technical but I only lasted just over a year due to health-rated issues that was resulted directly from that job.

Of course, I quit with nothing lined up and after a couple of months of feverishly applying for similar or related positions,

It was great in the sense that it was awesome not having to dress up for work and wear heavily discounted Lulu gear. The majority of my workout clothing comes from my time working there. Nowadays, I find it hard to justify purchasing anything from that store, even with my fitness professional discount. Of course, I will gladly accept whatever gift cards are given to me for whatever special occasion it is.  Gift card plus the discount = even better. 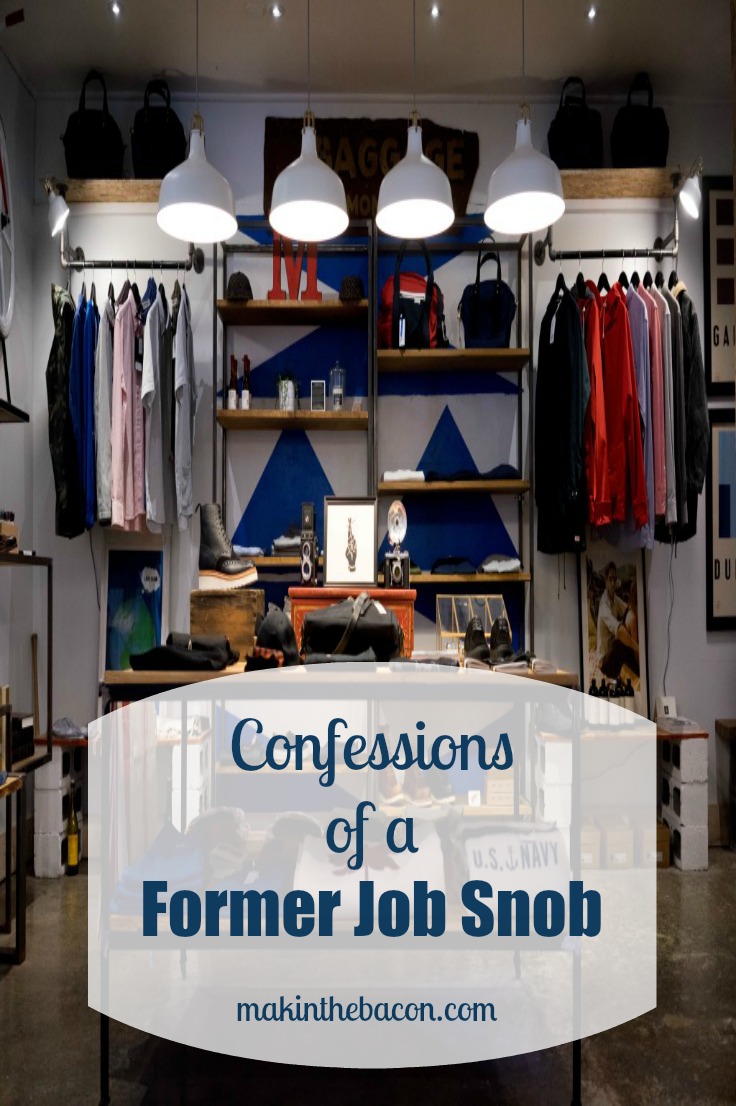 I know everyone’s there for the same reason. We’ve all got bills to pay, mouths to feed, school loans to pay back, etc. And the great thing about retail and food service jobs is the flexibility so you can have the time work on your  passions/side hustles.

But I felt embarrassed and defeated. Most of all, I felt like a complete utter failure. There I was, in my late 20s, folding and re-folding and re-folding yet again those classic Lulu hoodies that everyone wears. I felt the majority of the people who walked into the store, who supposedly could afford this stuff had a decent, professional job. Or they had a crapload of credit cards and were putting some of the total amount on this one and some on that one and the rest on that one and joking about how I shouldn’t tell their husband.

I hated it. I don’t even like shopping or the mall to begin with, so working in a shopping mall was torture to me. I like online shopping though because I can do it from the comfort of my own home, dress like a bum, and not waste time. But the job helped pay for the car. I was doing what needed to be done. And I hope I never have to work retail again. After having worked there for almost a year, I got an eleven cent raise. Not even a quarter.

My previous role with the government was another job I was not proud to be working at. If you know me in real life, you already know that it was the furthest thing away from a glamourous job or even a normal, comfortable office job.

I was not proud because of the initial reactions and comments from most people when I told them what I did for a living with the government. Most of the times I  made it sound quite vague or led people to believe I did  something completely different from what I actually did. Sometimes I don’t bother telling people what I used to do, because it’s all in the past and they say not to dwell in the past, but look to the future.

As Noel Gallagher said, “Don’t look back in anger, I heard you say” (Fun fact: I was OBSESSED with OASIS back in the day when BritPop and BritRock exploded in North America. I had the poster in my room and I bought the British music magazines. But I had never actually seen them live in concert).

But everyone has a story to tell  and  perhaps one day when the time is right, I will share with you exactly what I did, what it was like and why I wouldn’t recommend it to anyone, if you have other options.

I’d like to say my job snobbery has deteriorated. I know life can throw you some curve balls and compared to a lot of people, I’ve had it pretty good for the most part.  Nowadays, I have nothing but utmost respect (aka mad props) for people who are hustling like a MOFO, taking on the multiple jobs, doing what they gotta do regardless of what type of job that is.  People have to eat. People have to survive.