Yes. You read right. I’ll repeat it again. I paid for my own engagement ring and most of the wedding. I figured it was about time I brought it out in the open.  I was also the one who did the so-called “proposal”. No down on one knee, flowers, candlelight or anything like that. Just a message via my Blackberry (yes, I am one of those people) to his smartphone.

How’s that for a little bit of romance?

I ended up finding a ring I liked online and paid for it using my own credit card. He’ll eventually pay me back for it. He really wants to, but it doesn’t really matter to me at this point. I had contemplated about selling it afterwards, but I really do like it and the fact that it looks really unique compared to the majority of engagement rings made me decide to keep it.

Although since I am the one who asked him to marry me, should I have purchased a ring for him instead?

Deciding to get “engaged” (which I guess means wearing a ring and telling people you are going to get married) and getting married in less than a year may seem quite financially daunting to some.  If you are planning a large, elaborate wedding and don’t have the resources to do so,  then yes. If you are doing it on a smaller scale, then no. When you think about it though, as far I know, not that many people save up for a wedding UNTIL they get engaged. The time you’re engaged is really the time you’re saving for the wedding, right? 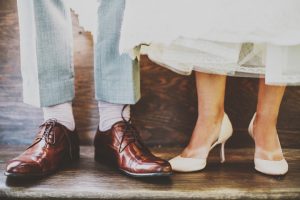 My wedding dress and his pants were longer than these guys’

So where did this extra money of mine come from? It didn’t come from the lottery, my parents, a big promotion or an inheritance.  It actually came from my previous job. From what I remember, I ended up receiving a payout, a long overdue raise and some backpay that was related to the long overdue raise. So lots of money there.

As far as traditions go when it comes to marriage, I’m somewhat non-conventional. I know the guy is “supposed” to but I’m the one who asked him out on a date. My husband points out that he was the one who did ask to move in together and buy a house, so he gets the win for that round.

Pay What You Can, but At Least Pay Something

Although my husband has been working longer steadily, has never been unemployed and makes significantly more than I do, I have more money stashed away in the bank.  Hence, on top of all that money I received from my previous job, I had extra money to spare.  Call me pragmatic, but it made perfect sense to me to have that money go toward the wedding fund. I felt that again, since I was the one who asked him to get married, I should try to pay for the majority of the wedding.  Of course, that doesn’t make me think any less of him.  Who paid for what and who paid what amount wasn’t really a big deal to me either.

So couples who are thinking about getting married, it really shouldn’t matter who buys what or who pays for what in the wedding.  In this day and age, people are getting married later in life (including yours truly), which means that they may have their own assets and savings already (at least, I would hope so). The majority of couples are dual income anyway before they get married. If someone can contribute more for whatever reason and it means that you guys won’t have to go into wedding debt, then do it.

So `fess up! Who paid more for the wedding, you, your spouse or your parents?