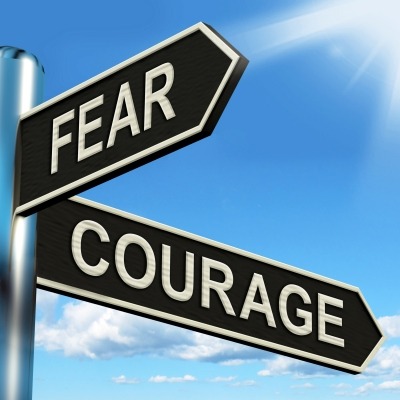 When I hear the word brave, I think that is the one word that definitely does not describe me. As much as I like to think of myself as someone who is somewhat adventurous and having done a couple of adventure type vacations, I wouldn’t really consider myself brave. I may have hiked the Inca Trail to Machu Picchu, but did I also mention I am deathly afraid of heights? The portions where we were hiking along a very narrow, rocky slippery path (meaning you were THISCLOSE to the edge) that had no fence or guard rail to protect from that who know how far down of a drop, I was basically sh*tting my pants.

Like personal finance, being brave is one of those things that can mean a lot to different people.  The general definition of being brave to me would be facing your fear and conquering it. I also think it can mean being afraid, but still going through with something you don’t want to go through with. It doesn’t have to be something on a grand scale either.

I was the one who asked for my partner’s number and asked him out on a date. Yes, I will tell, perhaps even brag about it to people sometimes that I was the one who asked him out initially and the first few dates after that. People would give me looks of surprise and I could hear sound of surprise in their voice when they say, “Really?!?!” As shy, awkward and anti-social as I am, I have asked several guys out on dates.

One thing I feel I haven’t been very brave about is my career. While I like my job enough, the laid back work environment, my boss, the people I work with and the overtime pay, I feel as if  I need to be thrown into a fire. After having been at my job for a few years now, I have become somewhat comfortable.  Maybe even too comfortable.Part of me wants to take risks and seek new opportunities within the organization, but another part of me just wants to stay because for once in my career, I am actually comfortable and don’t dread coming into work. As a self-confessed serial job hopper, this is a big deal for me.

Despite what my investor portfolio looks like, I am pretty risk averse when it comes to shaping my career path. I do have ambition and the drive, but at the same time, because I have taken several risks and made silly mistakes in the past, I think I am afraid to take another leap due to fear of failure or starting all over again. Mind you, there is nothing wrong with starting all over again. Change is challenging, but good. I just don’t know if I could ever start all over again, right at the very bottom.

I’m currently reading Lean In by Facebook COO Sheryl Sandberg. I have decided to give it a try based on recommendations by several fellow pf bloggers. If you haven’t read it yet, I highly recommend you do. Everything I’ve read so far has been truly insightful, eye-opening and inspirational. She mentions about how Mark Zuckerberg, the CEO of Facebook has a sign of inspirational sayings posted on an office wall.

One of them was, “What would you do if you weren’t afraid?”

I still have all of those fears but to a lesser extent. However, reading the book has helped me to start to re-think my fears.

Do you consider yourself to be a  brave person? Was there ever a time you had to face your fears head on?