Ok folks, this will be the last travel post for a while and I’ll get back to the usual random stuff. 🙂

So to continue from the tough second day hike, that was a 10 hr hike that just about killed me. By the time, I reached the campsite, I had barely enough energy to sit and eat my dinner. All I could think about was passing out. And that I did. But then I woke up in the middle of the night to unzip my mummy sleeping bag, which can be insanely warm, only to find the zipper was stuck. I ended up being somewhat cold throughout the night, which really sucks when you’re trying to sleep.

Day 3 was a much more enjoyable hike. For one it was shorter and two it was less steep and the terrain wasn’t as gruelling as the day before. We got to see some llamas/alpacas (Does anyone know the difference between the two? They look all the same to me) up close, which was cool, but didn’t get too close, because apparently they kick and spit. Just like camels.

Day 4 was the final stretch of the hike, the one that led us to Machu Picchu, the lost city of the Incas. We woke up at 4:00 am to line up to the entrance to the final part of the hike. There were already quite a few hikers waiting in line. The estimated wait time at the gate was about half an hour. And then off we went! In the beginning it was rainy. So being cold, sweaty and wet was not a pleasant feeling, but I was determined to get there. It’s as if I got my third wind and all I could think about was reaching the end point. Remember I mentioned a long rocky path, I forgot to mention that the walking sticks came in handy, especially for us vertically challenged folk (I’m only 5″2). Well for the final day of our hike, this long rocky path got very narrow and slippery and had a sudden drop off. There were no safety nets, harnesses or ropes.  How many times did I have to force myself to look ahead than look down and keep telling myself, ” Don’t look down. DON’T look down. DON’T LOOK DOWN!!!” After sh*tting my pants while hiking the final stretch, I finally made it!

Rather than being able to rest right off the bat, our tour guide was taking us up and down and all over the city. I honestly thought my legs would suddenly stop functioning and turn to jell-o. All I could think right then and there was food and a hot shower, two things we constantly take for granted.  So as you know, I made it back  home alive and in one piece with about 20 Peruvian mosquito bites, a bad cold and the feeling of accomplishment. 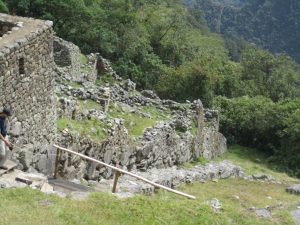 Some ruins seen along the Inca Trail 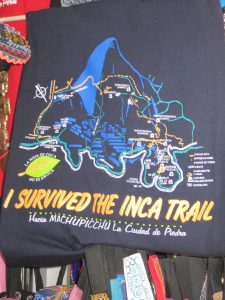 « All Aboard the Incal Trail to Machu Picchu Part I
Does Being Shy Hold You Back From Success? »